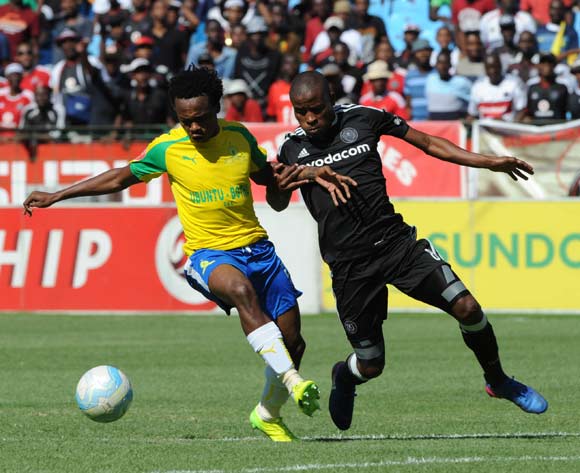 Welcome to the live play-by-play for the ABSA Premiership 2017/18 match between Orlando Pirates and Mamelodi Sundowns at Orlando Stadium.

46' The second half is underway
53' Tebogo Langerman (Mamelodi Sundowns) is cautioned.

Welcome to the live play-by-play for the ABSA Premiership 2017/18 match between Orlando Pirates and Mamelodi Sundowns at Orlando Stadium.

A goal by Marc Van Heerden was not enough for Orlando Pirates as they succumbed to a 3-1 defeat against Mamelodi Sundowns in the Absa Premiership on Wednesday night at Orlando Stadium.

The defeat leaves the Soweto giants placed at number seven on the log standings with 14 points after 10 league games.

For the visitors, two first half goals through Hlompho Kekana and one goal from Anthony Laffor ensured they ended their three-match losing streak.

As early as the second minute, the Brazilians grabbed the lead as skipper Kekana intercepted a back pass by Abbubaker Mobara to goalkeeper Wayne Sandilands and his block went into the goal, handing the visitors an early lead.

Despite Sundowns' early goal, the Buccaneers dominated the first 10 minutes as they pushed to get an equaliser.

However against the run of play, Kekana completed his brace in the 13th minute as he caught Sandilands off his line to hand the visitors their 2-0 lead after a spectacular long range effort from his own half.

After the first quarter, coach Pitso Mosimane's men won all the second balls in the heart of the park and kept Pirates in their own half, but there were no clear cut chances.

Yet right in the 20th minute, Pirates skipper Thabo Matlaba tried a long range effort to test keeper Denis Onyango, but could not hit the target.

The 30th minute allowed the visitors to push forward and Kekana nearly bagged his hat-trick after dispossessing Issa Sarr, only to see his shot going wide of the right post.

With seven minutes to the interval, Bangaly Soumahoro fouled Thabo Qalinge on the edge of the box and a fine left-footed set piece through Van Heerden brought the hosts back into the game as he beat Onyango hands down.

It was 2-1 at the end of the opening stanza.

The end-to-end stuff continued in the second half as both sides kept on attacking, but it was coach Milutin Sredojevic's side that threatened the most with their good passing display.

In the the 60th minute, Kekana tried a beautiful set piece on the d-line and managed to produce a fine save from Sandilands, who punched the ball away.

Pirates moved forward with purpose and Sundowns failed to clear the ball in the box which fell for Qalinge, but his shot was cleared off the line by Soumahoro in the 68th minute.

Qalinge showed his class but rushed his decision in the box in the final nine minutes after a clever turn to beat Sundowns’ defence, as he failed to put the ball into the net with Onyango out of his line.

The last three minutes saw the hosts dominating the proceedings as they constantly knocked at Sundowns door, but substitute Laffor grabbed the lead after a great pass from Themba Zwane to unleash a rocket on the roof of the net, 3-1.

Meanwhile, Sundowns now sit at number eight on the log table with 12 points after seven games so far.

Orlando Pirates and Mamelodi Sundowns will meet for what promises to be a titanic battle in the Absa Premiership at Orlando Stadium on 1 November 2017, kick-off at 19h30.

Pirates come into the match having gone four without a win in the league. Their last outing was a goalless draw away to Soweto rivals Kaizer Chiefs on October 21. It was Pirates’ third successive stalemate in the top flight.


The Buccaneers have performed strongly at home so far this season, claiming 10 points from a possible 12. Yet their last turn as hosts saw them held to a 1-1 draw by struggling Platinum Stars - coach Milutin Sredojevic will hope to see a return to winning form on home soil.

Sundowns come into the match having suffered a surprise 2-1 loss at home to AmaZulu on October 21. It was a second successive defeat for the Tshwane side, who have actually lost all three of their home matches - and all by the same score, 2-1 - so far this season.

The Brazilians, however, have been superb away from home, taking a full haul of nine points from three matches at SuperSport United, Free State Stars and Platinum Stars. Coach Pitso Mosimane will want to see his side keep up that proud record, especially at the expense of a fellow heavyweight like Pirates.

In head-to-head stats, Pirates and Sundowns have met in 65 league matches since 1985. The Brazilians have claimed 29 wins compared to 19 for the Buccaneers, while 17 matches have been drawn. The Soweto side has won 10 of their 32 home league matches against ‘Downs, suffering 15 defeats in the process.

Last season Sundowns claimed an emphatic league ‘double’ over Pirates, winning 6-0 at home in the first half of the campaign (a club-record defeat for Bucs) and 2-0 away in the return game in Soweto. The Tshwane side has won their last four successive league meetings with Pirates.