Both Letladi Madubanya of Baroka FC and Mhlengi Cele of AmaZulu FC could not get to the ball during the Absa Premiership 2017/18 football match between AmaZulu FC and Baroka FC at King Goodwill Zwelentini Stadium, Durban on 01 November 2017 ©Gerald Duraan/BackpagePix 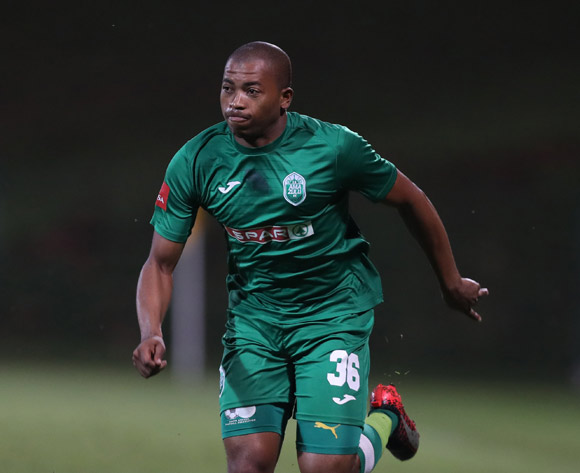 Simphiwe Mtsweni of AmaZulu during the Absa Premiership 2017/18 game between AmaZulu and Platinum Stars at King Zwelithini Stadium, Durban on 23 September 2017 © Steve Haag/BackpagePix

Welcome to the live play-by-play for the ABSA Premiership 2017/18 match between AmaZulu and Baroka FC at King Zwelithini Stadium.

Welcome to the live play-by-play for the ABSA Premiership 2017/18 match between AmaZulu and Baroka FC at King Zwelithini Stadium.

Baroka FC held AmaZulu FC to a 1-1 draw in an Absa Premiership match at the King Zwelithini Stadium on Wednesday night.

As a result, Usuthu remain ninth on the league standings, on the league table, while Bakgaga Ba Ga Mphahlele remain at the top of the log.

AmaZulu goalkeeper Boalefa Pule and his Baroka counterpart Virgil Vries were not seriously tested in the opening exchanges.

But Pule had to be alert in the 21st minute as Bakgaga Ba Ga Mphahlele looked to break the deadlock.

The former South Africa youth international made a good save to deny Baroka attacker Sipho Moeti.

However, Pule was beaten in the 29th minute after the visitors were awarded a penalty which was converted by Gift Motupa.

Rhulani Manzini hit the back of the net with wonderful overhead kick to make it 1-1 with Vries well beaten.

Baroka then contained AmaZulu in the remaining minutes of the first-half and the score was 1-1 at the interval.

AmaZulu coach Cavin Johnson made the first change of the game at the beginning of the second-half.

Siyethemba Mnguni replaced Boysen Mbatha as the home side looked to take the lead for the first time on the night.

Mzwanele Mahashe, a defender by trade, was introduced by Bakgaga in the closing stages of the match as the visitors looked settle for a draw.

Baroka were able to defend very well in the latter stages of the match and ultimately, the match ended in a 1-1 stalemate.

AmaZulu come into the match having claimed a surprise 2-1 away win over Mamelodi Sundowns on October 21. The Durban side’s first victory on the road this season was secured by goals from veteran strikers Siyabonga Nomvethe and Mabhuti Khenyeza.

Usuthu have a respectable home record this season, with eight points claimed from a possible 15. However, their last two turns as hosts have resulted in a 1-1 draw with struggling Platinum Stars and a 3-2 loss against Polokwane City.

Baroka suffered their first league defeat of the season when they went down 1-0 at home to Bidvest Wits on October 22. The Limpopo side had put together an eight-match unbeaten run prior to that result and still lead the log table despite the defeat.

Bakgaga have performed impressively away from home this season, claiming 10 points from a possible 12. Their last match on the road was a stunning 2-1 win over heavyweights Kaizer Chiefs in Durban in late September.

In terms of head-to-head stats, this will be the first top flight league meeting of AmaZulu and Baroka.