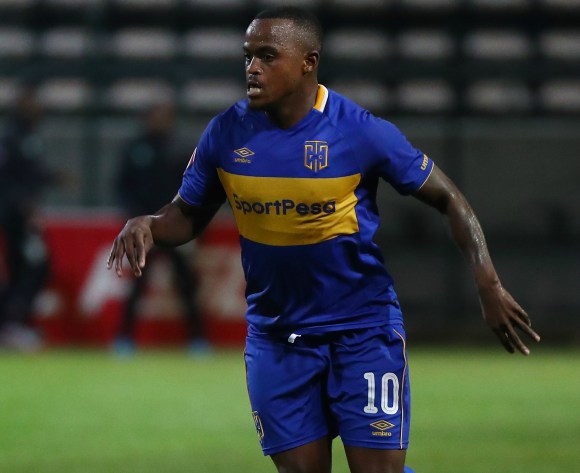 Welcome to the live play-by-play for the ABSA Premiership 2017/18 match between Cape Town City FC and Maritzburg Utd. at Athlone Stadium.

Welcome to the live play-by-play for the ABSA Premiership 2017/18 match between Cape Town City FC and Maritzburg Utd. at Athlone Stadium.

Maritzburg United successfully ended their winless run in the Absa Premiership with a 4-2 win over Cape Town City at the Princess Magogo Stadium in KwaMashu on Tuesday.

The Team of Choice were in danger of going nine league fixtures without a win as they trailed by a goal at the break, but Fadlu Davids troops finally found their rhythm in the second half of the clash to move up to 10th place on the log standings.

The Citizens opened the scoring after 17 minutes as Sibusiso Masina nodded home Ayanda Patosi's corner-kick, as the Cape club set their sights on the Premiership summit.

Maritzburg threatened to pull level before the interval, but City's defence kept firm as they held a narrow 1-0 lead at the end of the first stanza.

The KwaZulu-Natal side finally broke their goal drought as they pulled level in the 54th minute through Pogiso Sanoka. The goal the club's first in 13 hours of football.

Having bagged their first since mid-September, Maritzburg didn't have to wait long for their second goal of the night as Mohau Mokate gave the visitors lead in the 65th minute.

The forward completed his brace three minutes later, but City never gave up and pulled within a goal in the 89th minute as Lyle Lakay's shot cannoned off Bevan Fransman and into the back of the net.

Maritzburg, though, were not to be denied all three points as Siphesihle Ndlovu made sure of victory for the visitors in the fourth minute of stoppage time.

Cape Town City will look to extend their unbeaten run in the Absa Premiership when they host Maritzburg United at the Princess Magogo Stadium on 5 December 2017, kick-off at 19h30.

City have gone three matches unbeaten after they drew 2-2 at Golden Arrows on November 25. The Cape Town side fought back from two goals down to secure a share of the spoils, with Ayanda Patosi and Thabo Nodada scoring late in the clash.

The Citizens have had mixed results at home so far in 2017/18, with three wins, one draw and two defeats from six matches as hosts. Their last home match was a 1-1 draw with high-flying Baroka FC on November 21.

Maritzburg have gone eight league matches without a win after they were held 0-0 at home by Bidvest Wits on November 25. The KwaZulu-Natal side has managed just five goals in 10 matches and last hit the back of the net in a 1-1 draw with AmaZulu in mid-September.

The Team of Choice has claimed six points from five away matches so far this season, with their last game on the road a goalless draw at Polokwane City last month.

The Team of Choice has performed adequately away from home so far this season, claiming six points from five matches on the road. Their only away win was at Platinum Stars (2-0) on the first weekend of the 2017/18 campaign.

In head-to-head stats, City and United have met in just two previous league matches. Both of those encounters took place last season, with the Citizens claiming a 3-2 home win in Cape Town, while the return game saw the Team of Choice triumph 1-0 in Pietermaritzburg.