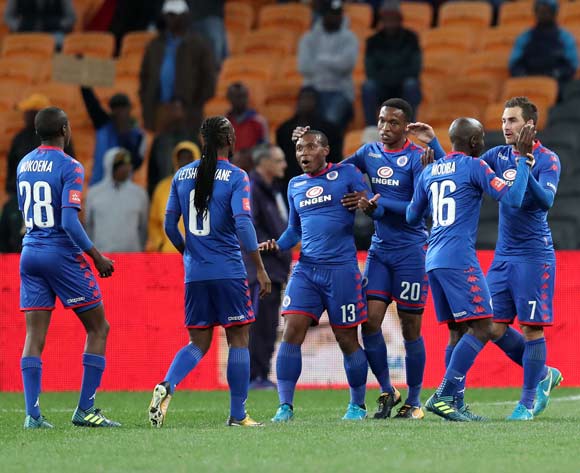 SuperSport United booked their place in the 2017 CAF Confederations Cup showpiece following a 3-1 (4-2 on aggregate) win over Club Africain at the Stade Olympique de Radès on Sunday evening.

Following a 1-1 draw at the Lucas Moripe Stadium in Atteridgeville earlier this month, Matsatsantsa played the perfect hand in Tunisia to seal their place in a continental final for the very first time.

Matsatsantsa will take on TP Mazembe in the final, with the defending champions having edged FUS Rabat over two legs.

Bradley Grobler got SuperSport off to the perfect start in Radès with Eric Tinkler's troops hitting the front after only 16 minutes.

Thuso Phala with the inch perfect cross to tee up Grobler who made a late dart into the penalty area before directing a thunderous header into the top corner of the net.

The hosts would continue to probe with Ronwen Williams particularly impressive to keep out Ghazi Ayadi's attempt in the 35th minute, but SuperSport held on to take a 1-0 lead into the break.

Matsatsantsa doubled their lead seven minutes following the interval. Teboho Mokoena slipping Jeremy Brockie through on goal, the New Zealand international making no mistake for his 10th CAFCC goal of the season.

Saber Khalifa cut the Tunisians deficit in half from the penalty spot in the 56th minute following a foul by Gould, but SuperSport would restore parity soon after.

Grobler completing his double after linking up with Phala once more in the 64th minute to put the result beyond any reasonable doubt.

Clayton Daniels had be alert to deny Club Africain another in added time, but it mattered little as SuperSport booked their place in the final.

Club Africain and SuperSport United will battle for a place in the 2017 CAF Confederations Cup final, when they lock horns in a semifinal, second-leg showdown at the Stade Olympique de Radès on Sunday evening.

The Tunisian outfit head into the clash with a distinct advantage, following a 1-1 draw in the reverse fixture at the Lucas Moripe Stadium in Atteridgeville earlier this month.

Thabo Mnyamane, who will miss the clash in Radès through injury, on target following Saber Khalifa's opener. The forward's fifth goal of the campaign as crucial as they come with the away strike set to prove pivotal in the outcome of the tie.

Both teams have set their sights on a first ever CAFCC crown, with SuperSport eyeing a maiden final appearance.

Matsatsantsa head coach Eric Tinkler, though, has been involved in a CAFCC final before, as recent as 2015 when he came close to lifting the crown with Orlando Pirates.

The Buccaneers suffering a 2-1 defeat to Étoile du Sahel over two legs.

What SuperSport lack in experience, they are surely to make up for in confidence with the club having claimed the MTN8 trophy last weekend with a hard-fought win over Cape Town City.

In the wake of the success, Tinkler expressed that he wants his troops to win everything on offer.

“I told my players that we needed to become addicted to winning - like it’s some kind of drug. You must want it all the time," Tinkler was quoted as saying by SunSport.

“Hopefully we get to Tunisia and get the result to progress to the final. That is the trophy I would obviously want to win. I take some pride from my time at Pirates - it has motivated me to do what I am doing now," he concluded.

In Mnyamane's absence, SuperSport will look to CAFCC top scorer Jeremy Brockie for goals. The New Zealand international has bagged nine goals in this season's competition.

Gehad Grisha will take charge of the clash in Radès.

The aggregate winner will take on either TP Mazembe or FUS Rabat in the showpiece. The Ravens take a 1-0 lead to Morocco following their success in Lubumbashi.