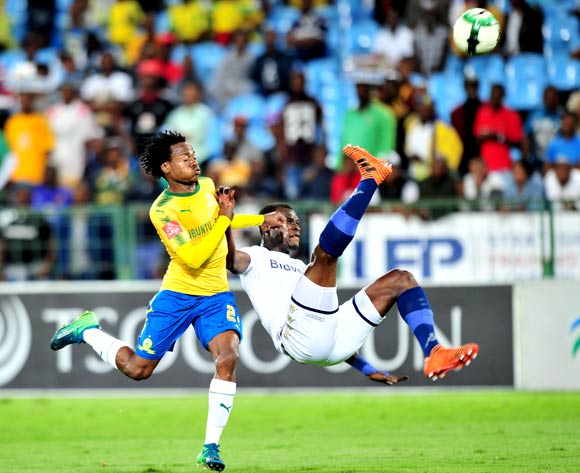 Welcome to the live play-by-play for the ABSA Premiership 2017/18 match between Mamelodi Sundowns and Golden Arrows at Loftus Versfeld Stadium.

46' The second half is underway
47' Hlompho Kekana (Mamelodi Sundowns) is cautioned.

Welcome to the live play-by-play for the ABSA Premiership 2017/18 match between Mamelodi Sundowns and Golden Arrows at Loftus Versfeld Stadium.

Mamelodi Sundowns took a major step toward claiming the Absa Premiership title after a 1-0 win over Golden Arrows at Loftus Versfeld Stadium on Tuesday evening.

The Brazilians’ victory was a nervy one, as they missed a catalogue of good scoring chances, but Ricardo Nascimento’s first-half penalty proved enough to take them six points clear of nearest chasers Orlando Pirates at the top of the log.

Sundowns nearly claimed the lead as early as the second minute, with Sibusiso Vilakazi’s clever back-heel putting Gaston Sirino in space, but his shot rebounded off Maximilian Mbaeva’s left-hand post.

In the 19th minute the hosts were denied what looked a clear penalty when Jabulani Shongwe tripped Vilakazi from behind in the 18-yard area, with the referee waving away their appeals.

However, just a few minutes later, the Brazilians were awarded a spot kick after Zolani Nkombelo clumsily brought down Vilakazi. Defender Ricardo Nascimento scored from the penalty to hand ‘Downs the ascendancy on 25 minutes.

In the 34th minute there was yet another penalty appeal from the hosts after Nkanyiso Mngwengwe challenged Percy Tau and didn’t appear to get any of the ball – again the referee ignored their pleas.

Through the remainder of the first half and the early stages of the second half, Sundowns continued to dominate and create chances, the best of which saw Tau put the ball just wide of the target 13 minutes after the restart.

Midway through the second half the Brazilians blew yet another opportunity when they put Vilakazi in space in the penalty area, but the attacker took too long to get a shot away and was closed down by Mbaeva, prompting calls for substitutions from the home supporters as the nerves and tension ramped up.

‘Downs coach Pitso Mosimane soon obliged by introducing Oupa Manyisa and Thapelo Morena off the bench in an effort to kill off the game, while Arrows sub Knox Mutizwa was somewhat unlucky not to be given a penalty after he tumbled in the box under a risky challenge from Wayne Arendse in the 79th minute.

On 86 minutes Tau found the back of the net after some pin-ball in the Arrows box, but the referee disallowed the goal after the ball struck the forward’s arm before he tucked it home.

Sundowns look to close in on title glory

Mamelodi Sundowns will look to take a major step toward claiming the Absa Premiership title when they host Golden Arrows at Loftus Versfeld Stadium for a catch-up match on 17 April 2018, kick-off at 19h30.

Sundowns picked up a fourth successive league win – and extended their unbeaten run to nine matches – with a 2-0 home victory over Bidvest Wits on April 14. The Tshwane side’s goals were netted by Themba Zwane and Sibusiso Vilakazi.

The Brazilians have claimed 20 points from 13 home matches this season, and are unbeaten as hosts since they lost 3-1 against Orlando Pirates in mid-January.

Arrows played to their 13th draw of the season when they were held 1-1 at home by Free State Stars on April 7. The Durban side has won just two of their last nine league matches for a haul of 10 points from a possible 27 in the sequence.

Abafana Bes’thende have claimed 15 points from 13 away matches this season, with their last result on the road a 1-0 win at Cape Town City on April 4.

In head-to-head stats, Arrows and Sundowns have met in 33 league matches since 2000/01. The Brazilians have claimed 16 wins compared to nine for Abafana Bes’thende, while eight matches have been drawn. The Tshwane side has won eight of their 16 home matches against their Durban counterparts, suffering two defeats in the process.

When the teams met earlier this season, ‘Downs claimed a 1-0 away win in December 2017 thanks to an early goal from Bangaly Soumahoro. The Brazilians have won their last three successive matches against Abafana Bes’thende without conceding a single goal.