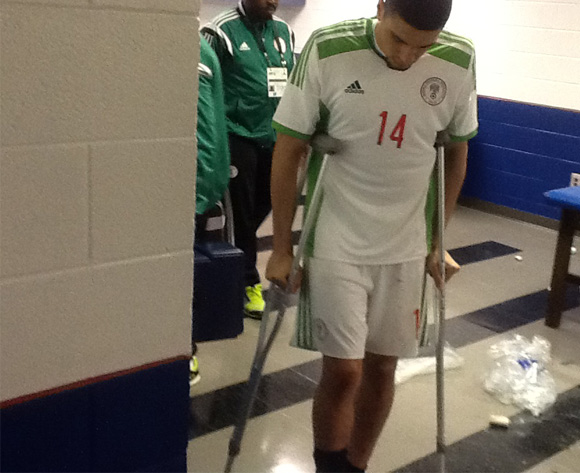 Nigeria debutant Leon
Baogun will be out for two months after he would have undergone surgery for the
injury he suffered against Mexico.

The Fortuna Dusseldorf of
Germany right back suffered a fractured foot in the highly explosive friendly
between Nigeria and Mexico on Wednesday in Atlanta Georgia, United States.


Super Eagles doctor Ibrahim Gyaran told coach
Stephen Keshi, that it was the best option open to the young defender and the
surgery will effectively rule him out for up to 8 weeks.


That may give him enough time to quickly bounce
back and rejoin the national team ahead of preparation for the World Cup in May
if invited.


The medics explained that if he does not carry
out surgery, it will take him 4 months to return to action which will
automatically rule him out of the World Cup.


His club medics have already been briefed about
the development even as Keshi says his immediate concern for the player is
about his health.

Balogun was involved in a horrific fall with a
Mexican striker near the dug house of the El Tri midway into the second half of
the encounter and hit his legs against objects in the technical area, forcing
the Nigerian bench to replace him even after spending 20 minutes on the pitch.


The player expressed his frustration on picking
injury on his debut. And happy to play for Nigeria.


I am a Nigerian, my father is from Ijebu Ode
and my mother is half Italian and half German, so I chose to play for my
fatherland and I am happy with it. The only thing at the moment is that I dont
understand Pidgin English, which many speak in camp but I will soon catch up
because I like the atmosphere in the Eagles camp. Balogun said.


The  players who bonded faster with Balogun
in camp include John Mikel Obi, Emmanuel Emenike, Victor Moses and Shola
Ameobi.

But am in tune with all
my teammates and Im happy the way I was received as if I have been with them
for a very long time but I have never met any of them till now. I pray my
injury heals on time so that I can return to playing football for my club and
country, he said.