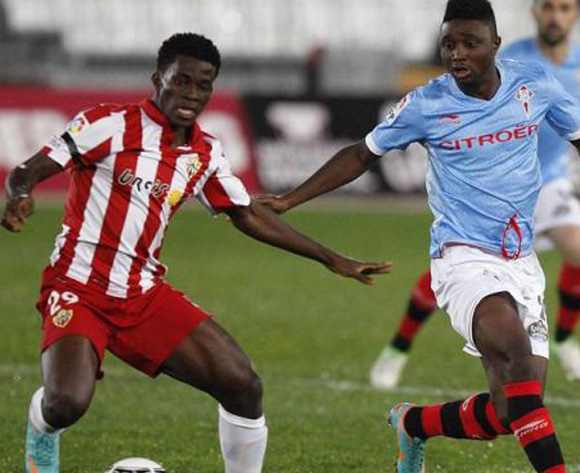 Ramon Azeez - Almeria may block his move to the EPL

Mikel was back in action as Michael Olaitan and Michael Eneramo
pressed on for World Cup consideration with goals.

Mikel
Obi: He was on from start to finish for Chelsea as they fell 2-0 to Manchester City
in the fifth round of the FA Cup.

Michael Olaitan: The
youth international scored his eighth goal in the Greek league to help
Olympiacos defeat Platanias 4-2. He has been consistent as he lasted for 73
minutes.

Michael
Eneramo: He netted his third goal in four league games for Karabukspor to help
them secure a 2-2 draw with Trabzonspor. He gave them 2-1 lead in the 54th
minute. He played full game and it remains a big puzzle the likes of Michael Uchebo
are being considered ahead of him by coach Keshi.

Ramon
Azeez: Eagles new invitee saw 69 minutes of action as Almeria lost 1-0 at
Levante. He was cautioned in the 38th minute of the game.

Elderson
Echiejile: He was not listed for Monaco as they won 2-0 at Bastia. He is yet to
play a league game for Monaco since his winter switch, but he has played two
cup games

Imoh
Ezekiel: Eagles new invitee was in action for Standard liege for 70 minutes in
their 1-0 win over hosts Sporting Charleroi. He was replaced by Camargo.

Kenneth
Omeruo: He was an unused substitute in Middlesbrough's 1-0 loss at Watford.
He has only played a game for the English Championship side.

Sunday
Mba: He was on for 87 minutes for CA Bastia in a 3-0 loss at Dijon. He
continues to get more game-time, but his team look doomed for the lower league.

John
Ogu: He was not listed for Academica, who drew goalless at Belenenses.

Juwon
Oshaniwa: He didn't see action in Israel for AS Ashdod as they drew 1-1 at
Hapoel Haifa.

Michael
Uchebo: The former Enugu Rangers striker was not listed for Cercle Brugge in a
2-1 loss to Zulte-Waregem.

Ike
Uche: He was not listed for Villarreal as he is still out injured. Villarreal
lost 2-0 at home to Celta Vigo.