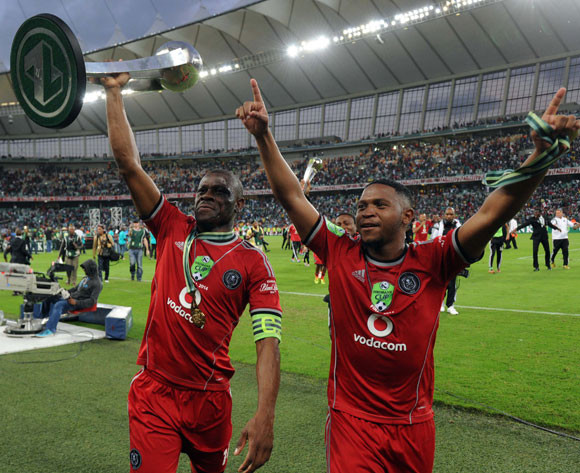 Kermit Erasmus scored a brace as Orlando Pirates came back from behind to beat Bidvest Wits 3-1 in the Nedbank Cup final at the Moses Mabhida Stadium on Saturday afternoon.

Erasmus cancelled Jabulani Shongwe’s opener early in the second half and also scored the third goal after Sifiso Myeni had fired the Buccaneers ahead.

The Buccaneers came close to taking an early lead in the first minute of the game as Mpho Makola released Kermit Erasmus on the right but Moeneeb Josephs made a solid block to keep his effort out.

Daine Klate had an opportunity from a freekick in the 16th minute but the winger curled his effort well wide of the target.

Wits broke the deadlock ten minutes later as Sithembiso Ngcobo found Shongwe on the left side of the box, who then shrugged his marker off before finishing from a narrow angle.

Ngcobo had an opportunity to increase the advantage in the 36th minute when he ran onto Sibusiso Vilakazi’s freekick at the far post, only to send his header wide.

Seven minutes later Oupa Manyisa set the ball up for Thabo Matlaba outside the penalty area, but the fullback blasted his shot well over the crossbar.

Meyiwa then pulled off a good save in the 51st minute, standing tall to block a stinging long-range effort from Ngcobo.

Pirates equalised a minute later as Erasmus beat Josephs with a deflected strike, connecting with a low cross from Oupa Manyisa.

Meyiwa was called into action again in the 58th minute, producing a reflex save to keep Ngcobo’s header out.

The Buccaneers took the lead in the 63rd minute as Myeni poked the ball past Josephs from a tight angle after he was set up by Manyisa.

Vladimir Vermezovic’s side increased their lead in the 72nd minute as Erasmus drilled a low shot into the back of the net from inside the box after Wits had failed to clear their lines.

Wits threw everything forward in the closing stages but Ryan Chapman could only send his header wide in the 81st minute before forcing a point-blank save from Meyiwa in the 91st minute.