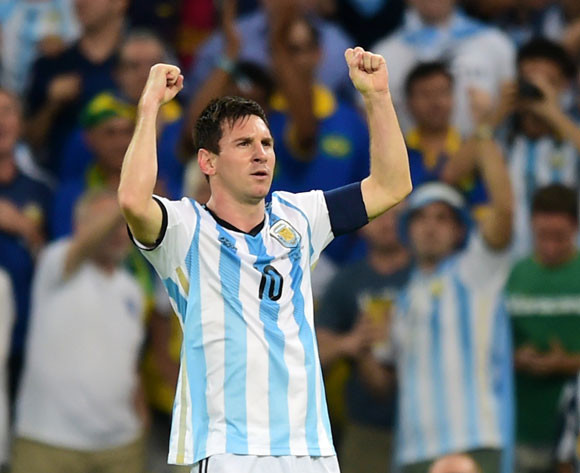 Lionel Messi scored a late winner as Argentina defeated Iran 1-0 in their 2014 FIFA World Cup encounter at the Estadio Mineirao in Belo Horizonte on Saturday.With Iran trying to hold on for a point, Messi eventually found the opening in added time to send his side through to the knockout stages.The first real opportunity of the match came in the 13th minute when Gonzalo Higuain made a run to the right side of the box to meet a pass from Fernando Gago, only to be denied by a block from Alireza Haghighi.The Iran goalkeeper then made an even better save in the 22nd minute, diving to his left to slap away a curled effort from Sergio Aguero, who had been teed up by Higuain inside the box.Argentina then had two good opportunities but failed to hit the target on both occassions as Marcos Rojo header just wide from a corner in the 24th minute, while Messi curled his freekick over the crossbar in the 33rd minute.Alejandro Sabella's side continued to threaten through setpieces but Ezekiel Garay headed over the crossbar at the far post in the 36th minute after connecting with Messi's freekick.Iran's only chance of the half also came from a deadball situation in the 42nd minute as Jalal Hosseini met Ashkan Degajah's corner at the near post but failed to keep his header down.Iran almost broke the deadlock against the run of play in the 53rd minute from a quick break which saw Pejman Montazei delivering a pinpoint cross for Reza Ghoochannejhad, but his header was kept out by Sergio Romero.La Albiceleste continued to throw men forward in search of the opening goal and came close in the 60th minute when Messi went on a solo run from the middle of the park before curling a left-footed shot just wide of the upright.Iran then threatened at the other end in the 64th minute as Ehsan Haji Safi's shot was deflected wide off Pablo Zabaleta, while Gago was forced to make a clearance from the resulting corner.Carlos Queiroz' side came even closer in the 67th minute when Degajah made a great run into the box to meet a deep cross from Montazeri, but his solid header was tipped over the crossbar by Romero.Argentina were awarded a freekick just outside the box on the left in the 74th minute when Angel di Maria was brought down by Masoud Shojaei, but Messi could only curl his effort onto the sidenetting.Haghighi then made two good saves to keep the scores level, saving a powerful strike from Di Maria in the 75th minute, before slapping away a header from Rodrigo Palacio in the 84th minute.The Argentine goalkeeper also had some work to do in the 85th minute, diving to his left to parry an effort from Ghoochannejhad, who had run onto a through-pass on the left side of the box.The goal eventually arrived in the fourth minute of added time when Messi collected the ball on the right and switched to his left before bending the ball out of Haghighi's reach and into the back of the net to secure the win for his side.The result leaves Argentina at the top of Group F with six points from two matches, while Iran have dropped to third place with one point.