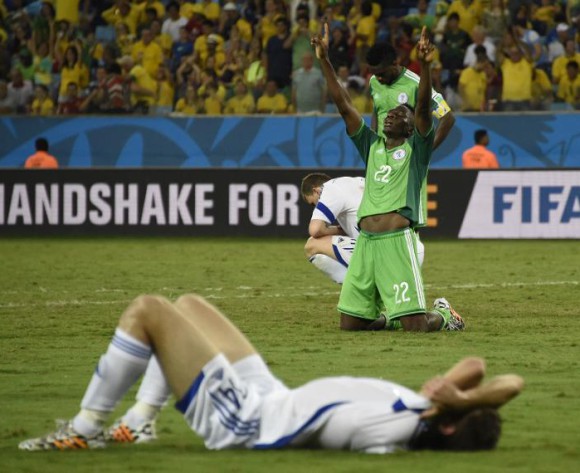 Joy for Nigeria, despair for Bosnia

Nigeria coach Stephen Keshi has promised his team will improve as they march on at the World Cup in Brazil.

The African champions beat Bosnia-Herzegovina 1-0 Sunday morning and will only need to avoid defeat in their final group game against group leaders Argentina on Wednesday in Porto Alegre to go through to the knockout stage for the first time since 1998.

They are second in Group F with four points from two matches.

“We are getting better with every game, the rhythm is going to come,” said Keshi after the hard-fought match.

“We won the game, the players showed character. The main thing is that we won and everyone is happy.”

One of the main talking points of the match was the good goal scored by Edin Dzeko in the 19th minute, which was chalked off by the referee from New Zealand.

“We need luck in life,” said Keshi in reaction to a question on the disallowed Bosnia goal.

"We are all happy for the victory, it was God who gave us the victory. We worked hard, put in our very best to win and God crowned our efforts,” Ambrose told AfricanFootball.com

“Bosnia are a strong side and they gave us a good fight."

By Arafat Aliu in Cuiaba, Brazil