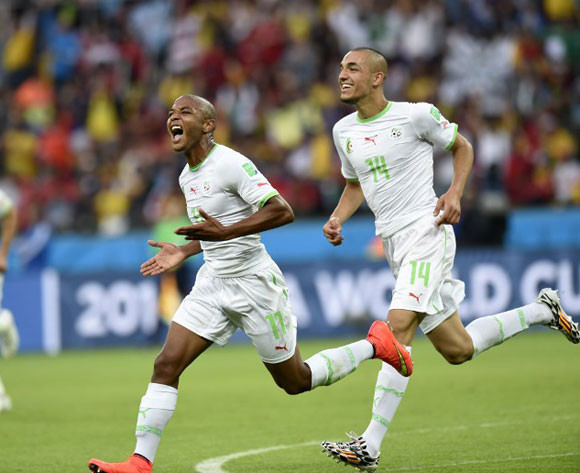 Algeria racked up a piece of African football history on Sunday night with an emphatic 4-2 victory over Korea Republic in a 2014 World Cup Group H clash in Porto Alegre.

The Fennec Foxes became the first team from the continent to score four goals in a World Cup finals match and picked up a vital victory – their first in the tournament since 1982 – that puts them in prime position to join Belgium in progressing from the pool.

Algeria started strongly but were guilty of wasting a couple of good chances, while Sofiane Feghouli should have been awarded an early penalty after he was upended in the 18-yard area.

However, Islam Slimani put Algeria ahead in the 26th minute and it opened the floodgates. The striker, who was one of five changes to the starting XI made by coach Vahid Halihodzic, latched onto a long ball from Carl Medjani, held off two defenders and poked the ball past goalkeeper Jung Song-Ryong to open the scoring.

Just two minutes later the ‘Fennecs’ doubled their lead. Abdelmoumene Djabou provided a great cross from a corner kick and defender Rafik Halliche beat Jung to the ball and powered home a header to make it 2-0.

In the 38th minute Djabou went from provider to goal scorer, making it 3-0 with a simple left-footed finish after Slimani had capitalised on a poor defensive header by the Korean defence and teed up his teammate.

Korea started the second half strongly and pulled a goal back in the 50th minute, with Son Heung-Min shooting through the legs of Rais Mbolhi after an error in defence by the usually reliable Madjid Bougherra.

Mbolhi came up trumps 10 minutes later when he dived full stretch to his left to keep out a long-range screamer from Ki Sung-Yong that looked destined for the top corner of the net, while Aissa Mandi also cleared a goal-bound header off his own line.

The North Africans settled their nerves with a fourth goal just past the hour mark. A wonderful passing move ended with Yacine Brahimi exchanging passes with Slimani in the penalty area before sliding a shot beyond the ‘keeper to make it 4-1.

The Asian side pulled another goal back in the 72nd minute, once again capitalising on poor defending from Algeria. Lee Keun-Ho was able to cross for Koo Ja-Cheol to score from close range and take the score line to 4-2.

Yet that was to be as good as it got for Korea, as the North Africans were able to see out the remainder of the game and claim a victory that puts them in with a great chance of advancing to the last 16 for the first time.