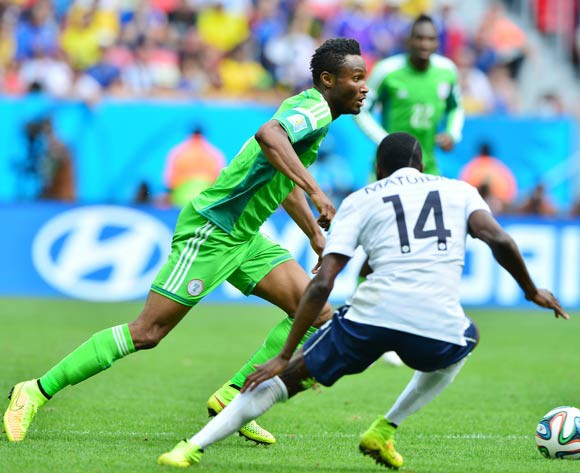 John Obi Mikel of Nigeria gets away from Blaise Matuidi of France during the 2014 Brazil World Cup Final Last 16 football match between France and Nigeria at the Estadio Nacional Brasilia, Brazil on 30 June 2014

Nigeria again failed to go past the round of 16 at the World Cup for the third time when they fell 2-0 to France on Monday in Brasilia.

The Super Eagles also crashed out of the tournament at this stage in 1994 and 1998.

France will now face the winners of the match between Germany and Algeria in the quarterfinal.

It was a tight yet open contest and it needed a mistake by goalkeeper Vincent Enyeama and a Paul Pogba header in the 80th minute off a corner by Mathieu Valbuena for 1998 champions to break the stalemate.

Antoine Greizmann then sneaked in between Enyeama and skipper Joseph Yobo in stoppage time to poke the ball home off the Nigeria skipper, who was credited with an own goal.

Greizmann had threatened earlier after Pogba’s opener, but Enyeama will deny the substitute with another instinctive save in the 84th minute.

The African champions looked to continue their dominance from the first half after the interval, but as the clock ticked away, France began to pile on the pressure.

After Osaze’s low, bouncing shot was beaten out by the diving France goalkeeper in the 64th minute, minute, Juwon Oshaniwa had to acrobatically clear the danger minutes later after Enyeama struggled to keep out a cross from the left delivered by Valbuena

In the 77th minute, France were unlucky when Yohan Cabaye’s cracking shot crashed against the Nigeria post.

Enyeama then foiled Benzema, whose header looked destined for the back of the Nigeria net.

Nigeria enjoyed more possession and also the better chances in the first half with striker Emmanuel Emenike getting his effort off a cross by Ahmed Musa after 18 minutes disallowed for offside.

The big Fenerbache front man also tested the reflexes of goalkeeper Hugo Lloris a minute before the interval when he fired at goal and forced the Tottenham Hotspur shot stopper to barely keep away from his net.

The best chance for Les Bleus fell to Juventus midfielder Paul Pogba, whose half volley from inside the box produced a big save from the impressive Enyeama.

France fullback Mathieu Debuchy also threatened the Super Eagles goal on 39 minutes, but his shot from inside the box missed its target.