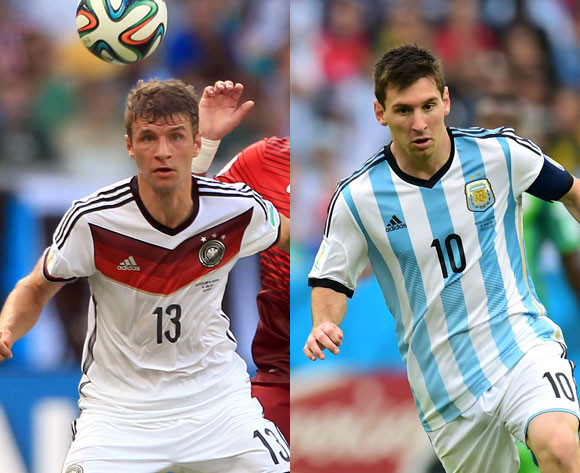 Sunday’s World Cup final may be a repeat of the Italia 90 final, which saw Germany come out victorious, but this fixture is poised to be a Lionel Messi versus Thomas Muller encounter.

The two influential figures for their respective teams are being looked at to lead the way when Argentina and Germany turn out at the Maracana.

Muller, who is three years younger than the Argentine, has been in impeccable form for the Germans, scoring five goals in his six appearances for his nation.

His towering figure and ability to rattle any defence with his mere presence inside the box will be a concern for the South American when they face-off.

And while he may be potent in front of goal, he doesn’t usually create as much as his opposite number. Nonetheless, Muller has a crew of ten other highly capable players behind him to help feed him the ball and his main task in the World Cup final will be to score.

Messi, meanwhile, has more pressure stacked on his shoulders.

As a captain he carries the whole nation’s expectations on his shoulders, as well as the motivation to win on Brazilian soil to hand the rest of South America a sucker punch.

Not only that, Messi’s comparisons to Maradona has made him the player to deliver in the final.

Unlike Muller, he is more versatile in that he can create, dribble, take set-pieces and has a natural eye for goal, where he has scored four times in his half a dozen appearances this World Cup.

He has numerous eyes closed on him by the opposition side as he looks to salsa his way through the European nation’s backline.

Argentina may have had a slower start to the tournament in comparison to Germany, but it will no doubt be an interesting final that can sway any way.