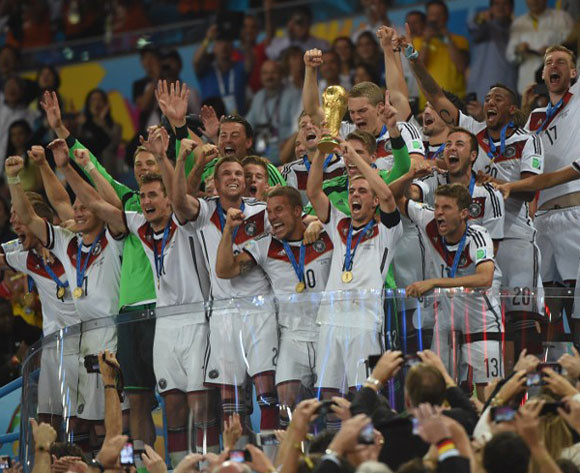 Germany ended a 24-year wait for their fourth World Cup title after defeating Argentina 1-0 after extra time in the 2014 final in Rio de Janeiro on Sunday evening.

Mario Goetze’s extra time volley was enough to separate the teams in 120 minutes of hard-fought football in which it looked as if a penalty shootout would be needed. Instead, the ‘Mannschaft’ can celebrate a first world championship since defeating Argentina by the same score back in 1990.

In the process they also became the first European team to win the World Cup on South American soil.

Joachim Low was dealt a major blow just before kick-off when midfielder Sami Khedira was ruled out with an injury picked up in the warm-up, while his replacement Christoph Kramer lasted just half an hour, having suffered a heavy blow to the head from Ezequiel Garay.

Germany dominated long periods of the first half, but it was Argentina who created the better chances. Their first arrived just four minutes in when Gonzalo Higuain shot just wide of the target from a tight angle, though Manuel Neuer seemed to have the effort covered.

The best chance of the first half fell the way of Higuain 21 minutes in. A terrible back-header from Toni Kroos put the former Real Madrid striker through on goal, but with only the ‘keeper to beat he pulled his effort wide of the target.

Lionel Messi also enjoyed a couple of occasions when he got the better of Mats Hummels, and on 40 minutes Germany needed Jerome Boateng to make a desperate clearance almost on his own goal line after the attacker squeezed a ball beyond Neuer.

Germany’s two best chances arrived late in the half, with substitute Andre Schurrle forcing Sergio Romero into a diving save after a great cut-back from Thomas Muller, while defender Benedikt Howedes struck the upright with a powerful header from a corner kick in injury time.

The second half’s only clear chance fell the way of Messi in the 47th minute but he dragged his low shot wide of the far post with only Neuer to beat, though the goalkeeper had done well to narrow the angle for the attacker.

As the minutes ticked down and the stakes rose ever higher, so the quality of attacking play suffered and it was no surprise that the end of 90 minutes saw the teams still locked at 0-0 and an extra half hour was called for.

For much of extra time it seemed as if penalties was an inevitability, but on 113 minutes Schurrle played a perfect cross from the left and Mario Goetze controlled the ball on his chest before sweeping a left-footed volley beyond Romero to make it 1-0.

The youngster’s brilliantly-taken goal was a strike worthy of winning the World Cup, and so it proved, with even Lionel Messi unable to drag ‘Albiceleste’ back into the match.