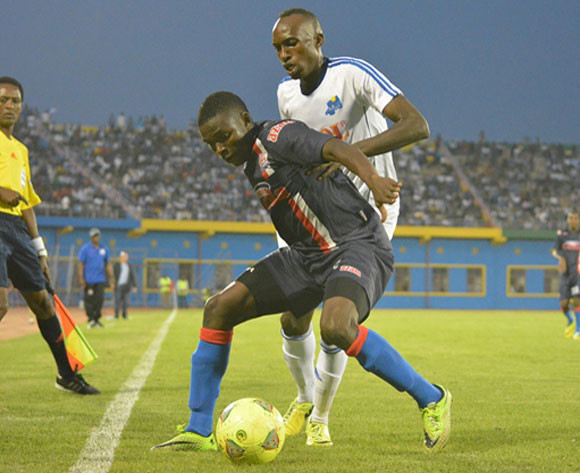 An Azam player battling it out with a Rayon Sport player

Tanzanian League Champions Azam FC will be all out to register a second win this afternoon to book a place in the quarter finals at the on-going Cecafa Kagame Club Championships in Kigali, Rwanda

Coach Joseph Onog’s team will face minnows Atlabara FC from South Sudan in a Group A clash at the Nyamirambo Stadium. After a goalless draw against Rayon Sport (Rwanda) and a 4-0 victory over Zanzibar’s KMKM FC, a win this afternoon will see Azam go top of the log with seven points.

“We are here for serious business and I am happy that my players responded well against KMKM after drawing in the first game. Let me hope we can be even better this afternoon,” Onog who guided Azam Fc to their first ever Tanzanian League title in the 2013/2014 season told AfricanFootball.com

The ice cream makers will look to their skipper John Rafael Bocco and Haitian professional Lionel Saint Preux who both netted two goals apiece in their second game. “We shall not underrate our opponents because every team in this tournament is good enough,” said Bocco.

But Atlabara FC who are making their first appearance in this regional tournament have vowed to give their best after drawing 1-1 against KMKM Fc in their opening tie. “We know what to expect against Azam FC because we have now watched two of their games. We shall defend cautiously and also try to foil their system of play,” said Atlabara’s Ugandan coach Leo Adraa.

After their 3-1 win over defending champions Vital’O on Monday and the earlier 1-0 win over El Merriekh (Sudan), Rwanda’s Police FC are the only team that have booked a quarter final berth in the tournament .

The second game this afternoon will see Ethiopian side Adama FC take on KMKM FC (Zanzibar). US$30,000 awaits the eventual champion, while US$20,000 is at stake for the runners-up and US$10,000 for the third placed.

Thulani Serero: My sofa is better than Bafana’s bench!