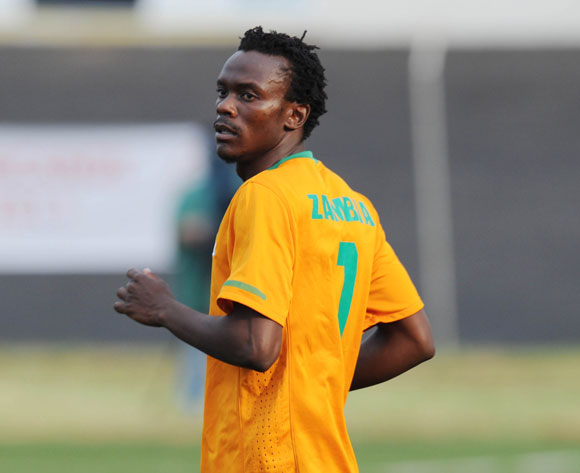 Zambia's Given Singuluma scored the winning goal against Mozambique

Zambia edged close to their seventh Africa Cup appearance after beating Mozambique 1-0 away in a penultimate Group F qualifier in Maputo on Saturday.

The win was Zambia second successive Group F victory and first away win in the qualifiers after a rickety start that saw them pick up two points in their opening three games.

Zambia were on the backfoot in the first half in Maputo as The Mambas piled the pressure led by Elias Pelembe and he came close to opening scores in the 9th minute but his effort was saved by his Mamelodi Sundowns club mate Kennedy Mweene.

The visitors had only one tangible chance on goal in the the first half in the 31st minute when defender Christopher Munthali header off a Rainford Kalaba cross was saved by Ricardo Campos.

Mozambique striker Maninho then missed a glorious opportunity to give the Mamba’s a 1-0 halftime lead when he failed to connect with Josemar's cross in the 42nd minute.

The Mambas then benefited from a questionable penalty in the 58th minute when Emmanuel Mbola’s clearance with his feet was adjudged to be a handball.

However, justice was served when Mweene again denied Pelembe, this time from the spot.

Zambia then recovered from that episode to seal the win in the 66th minute through striker Given Singuluma who fired in from close-range after some good work by Kalaba.

Zambia stay second after the win but rise to 8 points, one behind leaders Cape Verde who host bottom placed Niger in the late Group F kickoff on Saturday night while Mozambique stay third on 5 points.

Honour Janza's side host Cape Verde on Wednesday in their final Group F game in Ndola needing only a draw to book their place at January's finals in Equatorial Guinea.