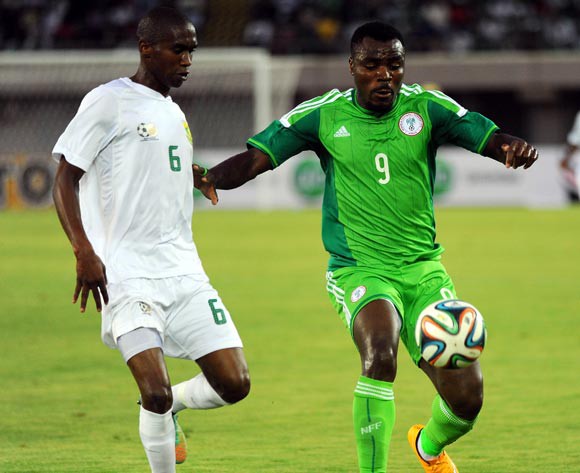 African champions Nigeria are still reeling in deep shock after they failed to qualify for next year’s AFCON in Equatorial Guinea.

The Super Eagles finished third in Group A on eight points after they forced group winners South Africa to a 2-2 draw in Uyo on Wednesday night.

Nigeria also failed to qualify for the 2012 AFCON hosted by Gabon and Equatorial Guinea in almost similar circumstances.

Scorer of Nigeria’s two goals on Wednesday Sone Aluko said the whole team are devastated by the failure to defend the crown they won in South Africa last year.

“We did not get the result we wanted, and we now have to pick ourselves up as a team.”

Coach Stephen Keshi blamed his players for taking South Africa lightly in a match they needed to win to qualify for the tournament proper.

“May be we took South Africa for granted and we paid dearly for this,” said the coach, who was only reinstated to his post last month after he was first eased out by the Nigeria Football Federation (NFF).

Former Nigeria skipper Segun Odegbami said he has yet to recover from the shock and that South Africa, who have had a poor head-to-head record against Nigeria, must now be taken a lot more seriously.

“I’m numbed with shock we are not going to the Nations Cup,” he said.

“We have always taken South Africa for granted, believing we can take them for breakfast, lunch and dinner, but they have now shown us that this is an end of era.”

“The players let a whole country down in front of their fans, just as was the case in 2011 when we also failed to qualify for the 2012 Nations Cup,” he said.

“We should now do away with this generation of players. We need hungrier and more committed players to represent Nigeria.

“Keshi should also bow out of the national team, his best was not good enough.”