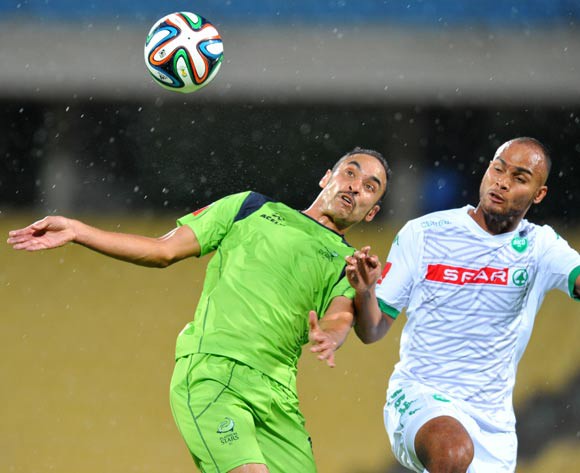 Eleazar Rodgers of Platinum Stars challenged by Robyn Johannes during the Absa Premiership 2014/15 football match between Platinum Stars and AmaZulu at the Royal Bafokeng Stadium in Rustenbur, South Africa on November 22, 2014

Usuthu twice fought back from a goal down to bring the game level, but they were ultimately defeated by Dikwena and are still awaiting their first league win of the season.

AmaZulu suffered an early setback when defender Carlington Nyadombo had to be replaced by Mfundo Nsele in the 28th minute. The substitute was called into immediate action and fouled Ndumiso Mabena to give away a penalty.

Eleazar Rodgers duly converted from the spot to rack up the first of his goals and put Dikwena 1-0 up.

However, AmaZulu fought back to send the game to half time with the score locked at 1-1. Bongani Ndulula teed up Tshepo Liphoko, who fired home with his right foot.

The start of the second half saw two goals in quick succession. First Rodgers scored the second of his goals by turning home an assist from Mabena in the first minute after the restart.

But Usuthu struck back in the 49th minute when Liphoko also completed his brace, this time beating goalkeeper Siyabonga Mpontshane with a left-footed shot to make it 2-2.

AmaZulu’s parity lasted only until the 70th minute, when Rodgers scored his third goal of the game, converting a cross from substitute Mahlatse Makudubela, to put the home side back ahead at 3-2.

AmaZulu tried to fight back for a third time, but their hopes were dashed in the 89th minute when Mabena scored from a Rodgers assist to make it 4-2 and wrap up the three points for Dikwena.

Stars will play in the Telkom Knockout final against SuperSport United next weekend, while Usuthu will be back in league action on December 2 when they face University of Pretoria at home.