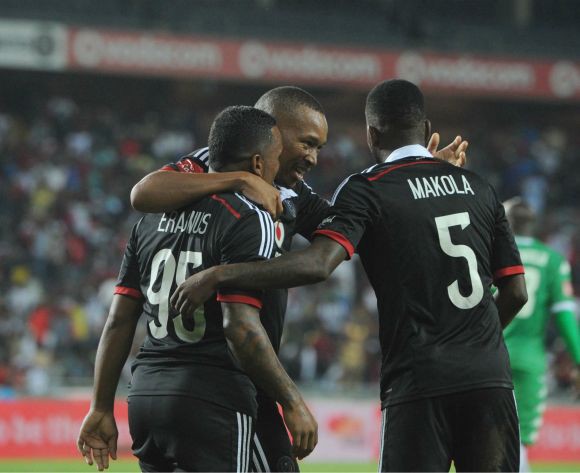 A first half goal by Lehlohonolo Majoro and a second half strike by Kermit Erasmus gave Orlando Pirates the three points against Bloemfontein Celtic at Orlando Stadium on Saturday night.

The 2-1 victory takes the Parktown-based outfit to position four with 26 points on the Absa Premiership and Larsen’s men are placed at the 10th spot with 20 points.

Both Siwelele and the Buccaneers were looking for maximum points after playing to a 2-2 draw in the reverse fixture in Bloemfontein and they started the game on fire, but the visitors were the first to take a shot through Gabardinho Mhango, however, Brighton Mhlongo safely held on.

In the 12th minute, Khethowakhe Masuku managed to grab a shot at goal but goalkeeper Patrick Tignyemb parried it over for a corner.

In return, Clinton Larsen’s men took the game to the hosts as Mukuka Mulenga cut through the Buccaneers defence but the keeper saved.

The hosts continued to pile pressure on Siwelele’s defence and their efforts were rewarded when Majoro beat the defence and chipped the ball over the oncoming Tignyemb, slotting it into an empty net.

The Sea Robbers played to protect the lead heading to the interval but a brilliant pass split the Bucs defence to find Lamola who, under pressure from defenders, beat Mhlongo to his right corner to make it 1-1 with three minutes to half-time.

The restart saw both sides carrying on where they left off, but Pirates were the side to find the back of the net through Erasmus when his shot was deflected by Bevan Fransman in the 67th minute.

A few minutes later, Erasmus nearly caught Tignyemb napping with a curler but deflected for a corner. The final few minutes of the game saw the game losing its spark as the hosts were protecting the lead and the introduction of Ntsikelelo Nyauza for Erasmus was Eric Tinkler’s signal to kill the game.

Siwelele fought hard to get an equaliser but Siyabonga Sangweni and Rooi Mahamutsa stood firm at the back to bag the three points.