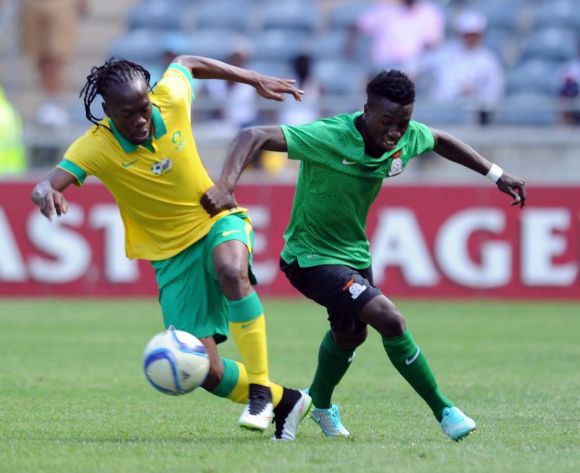 A late goal from Thuso Phala saw South Africa defeat Zambia 1-0 in an Africa Cup of Nations warm-up friendly at the Orlando Stadium on Sunday afternoon.

The match between Bafana Bafana and Chipolopolo looked set to end in a goalless stalemate until substitute Phala struck in the 81st minute to hand the hosts a 1-0 win before they head off to Gabon for a preparatory camp ahead of the AFCON.

Neither side managed any notable attempt on goal in the first 45 minutes, though Zambia were certainly the better team going forward and looked to enjoy more fluency and energy in the final third of the field.

South Africa’s only real glimpse at a goal in the first half arrived on the 20 minute mark when striker Tokelo Rantie almost caught goalkeeper Kennedy Mweene in possession, but the Mamelodi Sundowns player just about avoided embarrassment.

However, Mweene suffered an injury just before the break and was replaced by Danny Munyao – Zambia will hope the goalkeeper’s injury does not rule him out of the upcoming AFCON tournament.

On the hour mark, Bafana created the first clear chance of the match when Rantie and Anele Ngcongca burst through Zambia’s defence and the latter saw his shot deflected over the top from close range by Munyao.

Fifteen minutes later it was Zambia’s turn to miss out on a great opportunity after Erick Mathoho was caught in possession, but James Chamanga was unable to direct his shot on target with substitute goalkeeper Brilliant Khuzwayo having been drawn off his line.

The match looked set to end in a goalless stalemate until the 81st minute when Sibusiso Vilakazi put Thuso Phala in on goal and the SuperSport United winger broke the deadlock with a powerful shot that bounced down off the underside of the crossbar before crossing the goal line.