Amokachi not impressed despite Eagles 5-2 win 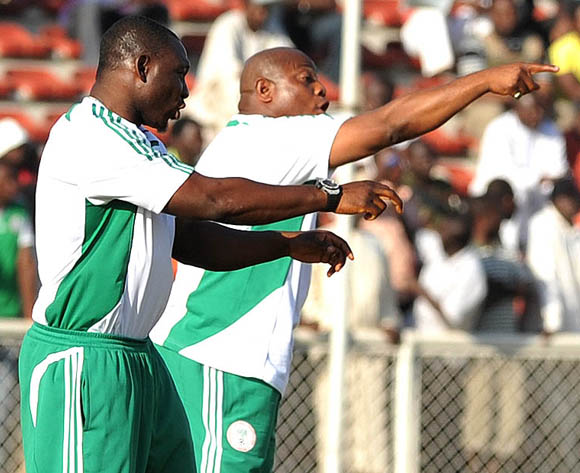 Coach Daniel Amokachi has said he is not impressed with his team of local Eagles even after they thrashed FCT League side NYSC 5-2 on Monday.

Amokachi said he was not impressed by the performance of his Eagles as they showed signs of heaviness, adding that more work needed to be done before the team departed for friendlies against Cote d’Ivoire and Sudan in Abu Dhabi.

“If you concede such an early goal against an experienced side like Cote d’ Ivoire you will be in trouble because you will have to chase the game all day,” he said.

The NYSC side drew the first blood in only the second minute of the match when number 10 shirted Nwowu Ikenna, sleek dribbles in the Eagles vital area ended on the legs of teammate, Omefe Ifeanyi, who did a ‘thank you very much’, by slotting home from close range.

The goal jolted the national team to reality and four minutes later hotshot, Mfom Udoh equalised after Gambo Mohammed’s beautiful run from the right fell to him.

But the NYSC team will not let go, as they again took the lead through Eugene Utom in the sixth minute after another defensive mix-up that forced Amokachi to pull out experienced defender, Azubuike Egwuekwe, who was apparently the culprit of the gaps noticed in the backline.

The Eagles seemed to wake up after that change with Nelson Ogbonna curtailing the excesses of the NYSC strikers, while teen sensation Kingsley Sokari alias ‘Bobby’ equalised in the 18th minute with a neatly struck goal.

Sokari added his second of the day in the 21st minute after a neat interchange of passes with inform Heartland winger Stanley Dimgba.

Two minutes to the end of the first half, Udoh got also his second of the day, after Gambo had done the hard part of the job. The first half thus ended 4-2.

They pressed for more goals but were a bit wasteful in front of goal. But Eduok will not allow the half to be dry as one his fine runs which caused trouble for the NYSC side was finally converted by Christian Osas Ighodalo, for the fifth and last goal of the match. This was in the 85th minute.