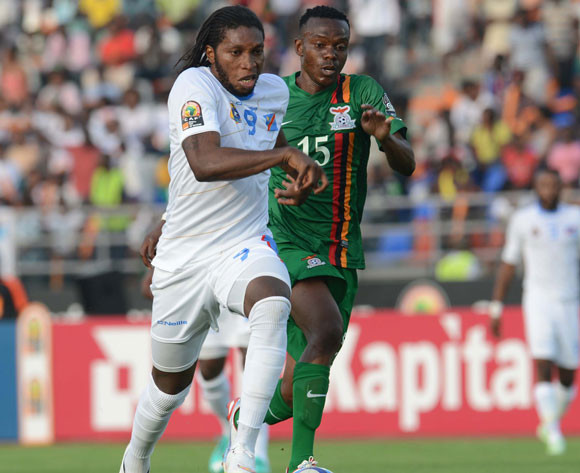 Dieumerci Mbokani of DRC vs Zambia's Given Singuluma on Sunday

West Brom ace Yousuf Mulumbu has said DR Congo could book their place in the quarterfinals of the 2015 AFCON with a win over Cape Verde on Thursday.

DRC looked impressive when they fought back from an early goal to draw 1-1 with 2012 champions Zambia in Ebibeyin on Sunday night.

And captain Mulumbu said he now expects the team to get their first Nations Cup win in nine years when they face 2013 quarterfinalists Cape Verde, who also snatched a 1-1 draw with Zambia in an opening Group B clash Sunday.

DRC beat Togo 2-0 on January 21 in Cairo, Egypt, to reach the quarterfinals of the 2006 Nations Cup. However, they only staged a comeback to the competition in 2013, where they drew all three group games.

“We need to win (on Thursday against Cape Verde) and that’s what I told my team,” said the West Brom defensive midfielder, who will be 28 on Sunday.

“We all still remember that in 2013 we did not go past the group stage and so we don’t have to wait till our final group game against a very strong Tunisian team to determine our fate.”

He said he was encouraged by his team’s second-half performance against Zambia on Sunday.

“We showed some good things in the second half and deserved to have won the match because we were better than Zambia,” he said.

“But we made so many mistakes offensively and so we couldn’t score more than the goal we got.”

He said with the many social problems in DRC, their long-suffering fans deserve more and he believes the large travelling contingent from across the border here to cheer them will also have something to celebrate on Thursday.

“The fans are always behind us and with the so many problems in our country, we need to make it up to them,” he said.

“And I hope they will be also behind us against Cape Verde.”