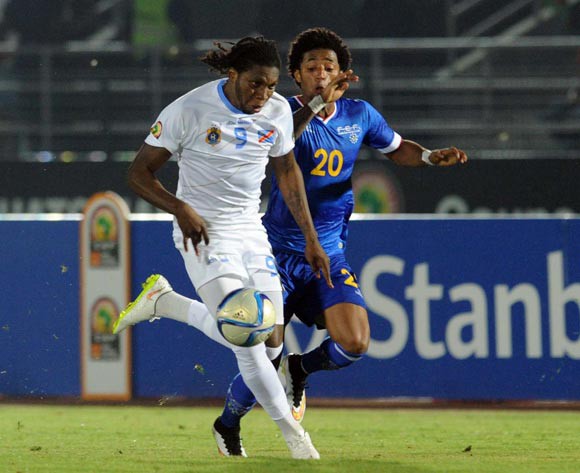 Ryan Mendes of Cape Verde battles with Diedonnei Mbokani of DR Congo during of the 2015 Africa Cup of Nations match between Cape Verde and DR Congo at Ebibeyin Stadium, Equatorial Guinea on 22 January 2015

DR Congo held Cape Verde to a goalless draw in a Group B Africa Cup of Nations match at Nuevo Estadio de Ebebiyin on Thursday night.

The Leopards needed goalkeeper Robert Kidiaba to make a couple of crucial saves late in the game to ensure they came away with a share of the spoils against the Blue Sharks.

Cape Verde were the first to threaten a goal, with Ryan Mendes feeding Kuca on the right of the penalty area, but the forward’s strike at goal from a tight angle flashed over the target in the fifth minute.

Four minutes later Babanco went direct for goal from a long range free kick and had DRC goalkeeper Robert Kidiaba worried with an effort that carried just over the top of the crossbar.

DRC suffered a major blow in the first half when influential midfielder Youssouf Mulumbu was forced off the pitch with what looked to be a hamstring injury. Munganga Omba replaced the West Brom player in the 23rd minute.

The Blue Sharks created a fine chance to open the scoring just past the half hour mark when Babanco’s curling free kick picked out Calu, but the midfielder’s header went straight into the arms of Kidiaba.

DRC created little in attack in the first half, with their only notable effort on goal arriving in injury time before the interval. Yannick Bolasie squeezed away a low shot from just outside the penalty area, but goalkeeper Vozinha got down low to his right to make a fine save.

The Leopards also had the first shot in anger of the second half, with Cedric Mabwati capitalising on a defensive error to move into the box and let fly with a right-footed effort that missed the near post.

The closest the match came to producing a goal arrived in the 85th minute. A Cape Verde corner kick saw Tony Varela’s goal-bound header well saved by Kidiaba, who then reacted quickly to deny substitute Platini on the follow-up.

Three minutes later Heldon thought he was on course to score his second of the tournament, having cut inside a defender to let loose a left-footed strike, but Kidiaba was brilliantly positioned to make the block.

With Tunisia having beaten Zambia 2-1 in the evening’s earlier match, the draw in this encounter means the two teams are tied in second place on two points apiece, while the North Africans lead the way with four. Zambia are placed last with one point.

The final round of Group B matches takes place on Monday, January 26. Cape Verde will face Zambia in Ebebiyin, while DR Congo tackle Tunisia in Bata. Both matches kick-off at 20:00 CAT.