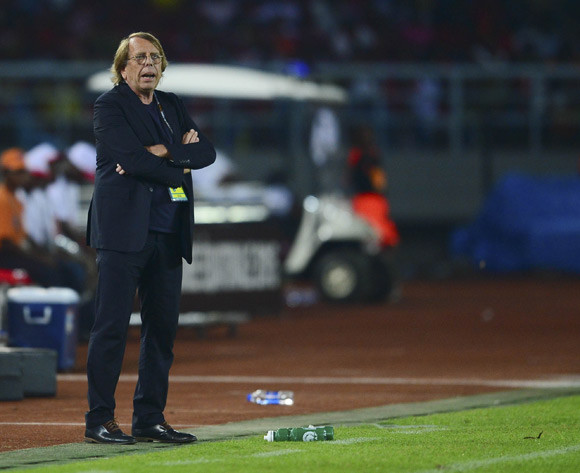 Claude Le Roy, coach of Congo during the 2015 Africa Cup of Nations

Group A table leaders Congo Brazzaville will have to be at their best when they face Burkina Faso on Sunday in the on-going Africa Cup of Nations (Afcon).

The two teams will make a journey to the Ebebiyin Stadium as the two Group games will be played at the same time.

After winning their first game in 41 years at the Afcon, Coach Claude Le Roy is hoping that his Congo Brazzaville team can raise to the occasion and win another game.

“We respect Burkina Faso because they play good football and have experienced players. But we know how to approach that game and will see what happens on the pitch,” said the French man who has handled several African teams.

While the Bukina Faso need a clear win with a good goal margin to qualify for the last eight, Le Roy’s side can afford to settle for a draw. But the coach reckons that they will not be chasing a draw, but a win. He said his boys are now very motivated after the win over Gabon and want to continue with the winning mentality.

Cesar Dorlich Sidney Gandze who picked a knock in the match against Gabon will undergo a late fitness test before he is risked in this tough encounter. But Le Roy explained that they have other players who can fill up the position. Skipper Prince Oniangue, Tievy Bifouma and Fode Dore are expected to lead the Congo Brazzaville team in search of a second win in the tournament.

Jonathan Pitroipa who has continued to miss many scoring opportunities in the tournament must come all out to prove a point if his team is to avoid an early exit.

"We need to take our chances in-front of goal. The team has continued to create chances and chances, but we need that final finish,” said the Burkina Faso coach Paul Put.

Burkina Faso who reached the finals of the 2013 event will also look to instrumental players Charles Kabore, Alian Tarore, Bertrand Traore and Aristide Bance to do the magic.