SA crash out as Ghana qualify 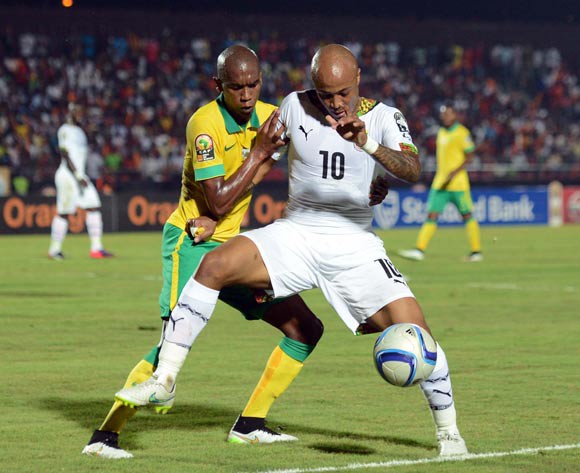 South Africa crashed out of the 2015 African Cup of Nations after superb second half perofrmacn from Ghana saw them come from behind to win 2-1 in their Group C match at the Estadio De Mongomo on Tuesday night.

Mandla Masango gave South Africa the lead before second half goals from John Boye and Andre Ayew earned Ghana the win that saw them top the group with six points.

In the group’s other game Algeria beat Senegal 2-0 to finish second on the standings, followed by Senegal in third with four points and South Africa in last spot with one point.

Ghana controlled the possession early on and had a great opportunity to open the scoring in the sixth minute when Jordan Ayew let rip with a low shot from just inside the box, but he saw his effort saved by Brilliant Khuzwayo.

The South African keeper, though, spilled the initial shot straight back into the path of Jordan Ayew who proceeded to round him, but saw his shot cleared off the goalline by Erick Mathoho.

Ten minutes later Mandla Masango gave South Africa the lead, against the run of play, with a thunderous 22-yard volley that beat the keeper hands down, 1-0.

Despite the shock of going behind Ghana continued to push forward and nearly levelled matters in the 34th minute when Baba Rahman unleashed a powerful shot from 35-yards, but he saw his effort well-saved by the keeper.

Two minutes later Ghana suffered a bit of a set-back when Daniel Amartey had to leave the field injured and was replaced by John Boye.

South Africa took advantage of this set-back and came close to finding their second five minutes before the break when Bongani Ndululu met a right wing cross from Anele Ngcongca, but his header was saved by the fingertips of the keeper.

The second half was all Ghana and it was only a matter of time before they equalised.

That goal came in the 72nd minute after John Boye fired the ball home from 12-yards out after a goalmouth scramble.

Ten minutes later Andre Ayew scored the winner for Ghana when he headed home a left-wing cross from Baba Rahman, 2-1.