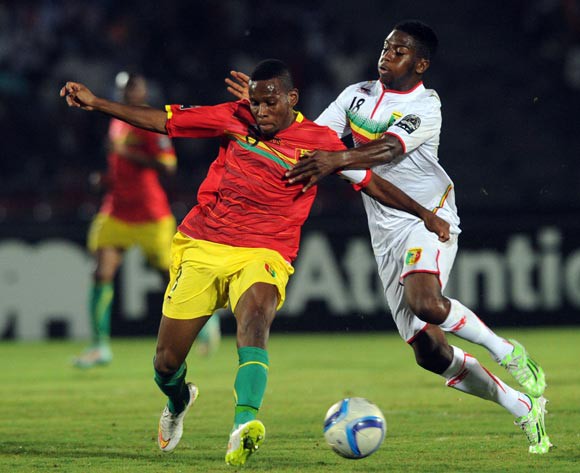 Ibrahima Traore of Guinea battles with Abdoulaye Diaby of Mali

Guinea have now set their sights on going past Ghana Sunday for a place in the semi-finals of the 2015 AFCON after they proved luckier than Mali in the draw of lots.

The Syli National got the luck to advance to the last-eight after they were tied on the same statistics with Mali and a lot had to be drawn to determine the team to qualify for the knockout stage of the tournament in Equatorial Guinea.

Sunday will be a rematch between West African foes Ghana and Guinea after they also clashed in the qualifiers with the Black Stars winning 3-1 at home and picking a 1-1 draw in Guinea.

Guinea skipper Kamil Zayatte said they ought to have learnt from these qualifying matches and now hope to go through against the much-fancied Ghanaians.

“We made some mistakes against Ghana during the qualifiers. It must teach us a lesson,” said the Guinea star.

“Ghana are one of the big African teams. We played them lately and now it’s time to hold them. We’ll try to do everything to progress.”

Mohamed Yattara, who scored against Ghana in Tamale, said he expects a very open West African derby on Sunday in Malabo.

“We are going to play against a very good Ghana side, a team who we know well but who also knows us well. I think the game will be very open. We know that we are going to face great players who are used to compete in big competitions,“ he said.

The winners of this clash will battle the winners of the match between Equatorial Guinea and Tunisia for a place in the Championship game on February 8 in Bata.