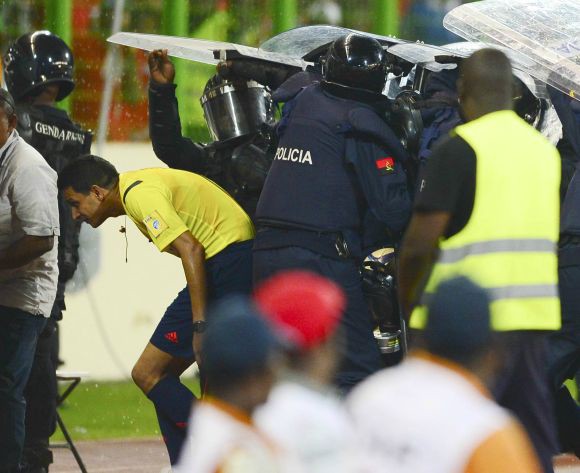 The Equatorial Guinea team has apologised for the hooligan acts committed by their fans in Thursday's semifinal loss to Ghana.

Ugly scenes erupted towards the end of Equatorial Guinea’s 3-0 loss to the Black Stars in Malabo that saw Ghanaian supporters attacked by the host nation's fans forcing them to seek safe refuge on the pitch.

This forced Gabon referee Eric Otogo-Castane to suspend the match for over 40 minutes as Equatorial Guinea fans bombarded the pitch with mostly plastic bottles.

Riot police then battled to quell the violence and a state security helicopter hovered menacingly over the stadium in a show of force.

“I am really sad with what happened with the supporters," Equatorial Guinea coach Esteban Becker said.

At one point the Equatorial Guinea players went to one section of the stands to plead with their supporters to stop throwing projectiles on the running track below where the terrified Ghana supporters were huddled.

“I am very sorry on behalf of the whole team. I never played in this kind of atmosphere," Equatorial Guinea captain Emilio Nsue said.

Equatorial Guinea's last minute decision to host the tournament has been blighted with controversy before and during the tournament.

Initially, it was over how prepared the country was to host the tournament at such short notice following Morocco's decision to withdraw as hosts citing Ebola fears in November.

Equatorial Guinea had prior to kickoff only two stadiums already online while an additional two facilities were completed on the eve of kickoff.

On the pitch, Equatorial Guinea had two controversial penalty decisions going their way in wins over Gabon in the group stage before boiling over in a 2-1 quarterfinal win over Tunisia when they were awarded a late penalty to equalise on their way to dramatic extra-time win.

The Mauritian referee in that match was allegedly accosted by Tunisian players and officials in a post-match fracas in Bata before further drama spilled over across the Bight of Biafra four days later on Bioko Island in Malabo against Ghana.

Equatorial Guinea stay in Malabo this Saturday to face DR Congo in a battle for bronze with a dark cloud hanging over them as the curtain comes down on one of the most controversial Africa Cup ever staged.