Shivambu: We’re ready for any team 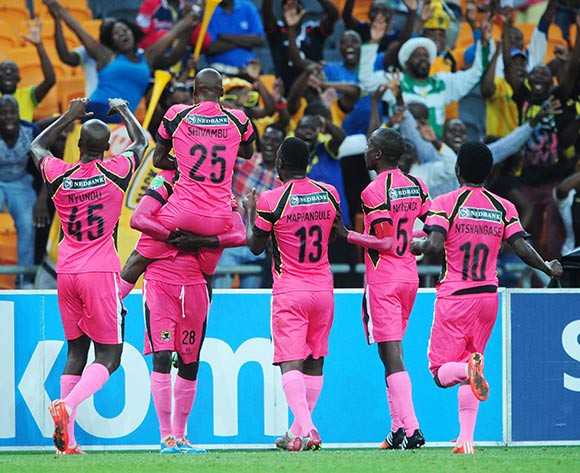 Morgan Shivambu of Black Leopards celebrates his goal with teammates during the 2015 Nedbank Cup match between Kaizer Chiefs and Black Leopards at the FNB Stadium, Johannesburg on the 21 March 2015 ©Muzi Ntombela/BackpagePix

Black Leopards midfielder Morgan Shivambu said the mood is high in their camp following their gutsy display against Kaizer Chiefs in the Nedbank Cup.

The former Moroka Swallows man said their quarterfinal draw against Vasco Da Gama in the Nedbank Cup is different from the clash against the Amakhosi because they play in the same league and aware of each other’s qualities.

Lidoda Duvha beat Stuart Baxter’s men 2-1 last Saturday and the Malamulele-born player was on the scoresheet.

“Yeah everyone is till excited back in Limpopo although they don’t know yet who we’ll face. However, the draw against Vasco is a good one,” said Shivambu.

“They’ll be more excited to know we’re facing Vasco because we happen to know them. It’s not going to be easy as people will say because we play in the same league.

“This is unlike Chiefs who we surprised as we don’t play in the same level. Vasco know us very well and I expect a tough match.”

When pressed for comment in relation to eliminating Chiefs and whether they’re in line to clinch the cup, Shivambu said they need to take it one game at a time.

“If we beat Vasco and then progress through to the next round then it will be another story you know,” added the 32-year-old.

“I can't really say the fact that Chiefs and Pirates are out means we have a chance to claim the trophy because there’s (Mamelodi) Sundowns and SuperSport United.

“We’re ready for any team, but we must remain disciplined.”