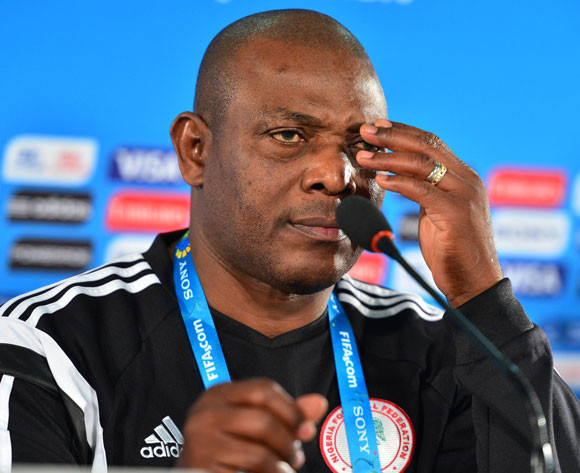 Stephen Keshi has made a last-ditch attempt to save his job through his agent and brother Emmanuel Ado, who has insisted the coach is willing to work with the NFF president while also apologising on behalf of Keshi for the failure to qualify Nigeria to the 2015 AFCON.

Keshi’s agent Ado in an interview with journalists described the relationship between NFF president Amaju Pinnick and his client as one of mutual respect.

According to him, any perceived "problem whether real or imagined" between them would always be resolved amicably in the interest of the game and the country they both love.


"Keshi has always related well with Amaju as a brother and as chairman of the Delta State Sports Commission before now. The chairman’s passion and achievements over the years bear eloquent testimony  to what he is capable of replicating in his new job at the NFF,” he said.

“After the 2013 Nations Cup, Amaju was instrumental to Delta State Government hosting the team and the renaming of the Asaba Township Stadium after Stephen Keshi.

“This is contrary to insinuations being made in some quarters, that Keshi and Amaju  can never work together. For the information of all, both men understand that in the interest of Nigerian football they must "work together" to move Nigeria football forward. The lessons of the last few months is that united we win and divided we fail."


He continued: "Allow me to state unequivocally that there will always be differences, but it is how these differences are managed that is critical. So moving forward I expect that the board, the media, the fans and the coach would continue to rub minds on issues that will help our football, but once the coach takes a decision, he should be supported.”

Ado further described as unfortunate the story in certain newspapers that Keshi called the president of the federation a liar.

"Keshi is ever decorous and will never use such a word for the president of the federation. He is too cultured to use such a word,” the agent maintained.

"Those who profit from sensationalism as a way of life, create chaos by twisting facts out of context only to suit their own purpose.”

Ado also said Keshi was not behind the arrest of former NFF boss Aminu Maigari by security operatives.

“The other unfortunate story that I have read  is that Keshi was behind the arrest and detention of the former president Aminu Maigari,” he said.

"This is a blatant lie.Who is Keshi to order his arrest? The truth is that Keshi visited Maigari and prayed for his release. And Maigari was also instrumental in him becoming the chief coach of the Super Eagles.

“In the interest of peace  and for the record I want to first and foremost thank Aminu Maigari for his support for my client. And to stress that Keshi never and would never wish him any ill luck.

"History will remember his contributions to Nigerian football."

In a similar vein, Ado apologised to the country for the failure of the Super Eagles to qualify for the 2015 edition.

"There were problems that contributed to the failure of the team to qualify for Equatorial Guinea,which by the Grace of God has been largely resolved," he said.

“We ask for forgiveness and support for the team to ensure that they get back to their winning ways.

“I want to assure Nigerians that we - Felix Anyansi  Agwu, the chairman technical committee, will continue to work on both  men  - Amaju and Keshi - to ensure that they put all the issues that have threatened their relationship behind and to ensure that any "crisis" is resolved before they become a problem.

“On this, I must put on record my gratitude to Felix Anyansi.

"Everyone has realised that the deliberate falsehoods planted in the media by enemies of progress who believe they are helping both men, is a big disservice to the image of both men and the federation.

“I am happy that everyone has realized that  and are determined not to allow the situation to continue, And that what they need is for the Super Eagles to return to playing and winning well."

Ado further commended the NFF and most especially Anyansi for the professional manner they  handled issues relating to the contract.

On the issue of the NFF reportedly offering his client a "slave contract", Ado explained that he was the one who made the statement in the context of reports that "Keshi was going to sign the contract without negotiations”.

"I made that statement that Keshi will not sign the contract until he has made an input. That contracts are not take it or leave it documents. And that only a slave has no say when his destiny is being decided,” he said.