Kotoko crash out of Africa with Eulma loss 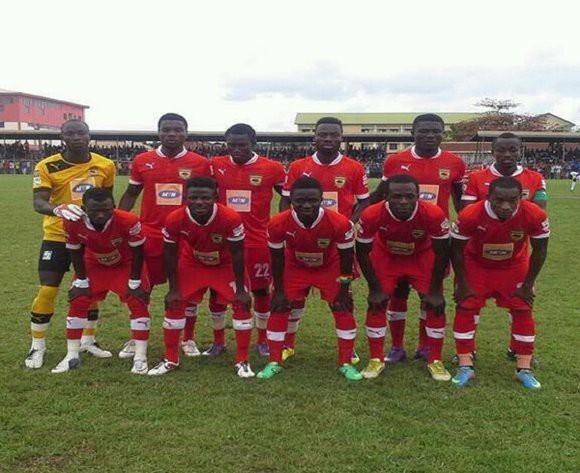 Asante Kotoko kicked out of Africa

Asante Kotoko crashed out of the CAF Champions League with a 2-1 home defeat to MC El Eulma on Sunday.

The Algerian visitors fought from a goal down to secure the impressive result which left the Baba Yara Stadium in Kumasi shell-shocked with the Ghanaian champions kicked out of Africa’s elite club competition without reaching the group phase.

Kotoko however had the first laugh with striker Obed Owusu scoring the opener.

The Porcupine Warriors had to wait until five minutes to the end of the first half to clinch the lead despite an impressive start.

Their early efforts were however thwarted by some good defending from the Algerians and heroics of goalkeeper Mohammed Ouserir.

Eulma were however forced into an early change after just 11 minutes when defender Khaled Bouzama had to be replaced by Mokhtar Belhkiter after picking up an injury.

The resilient visitors managed to hold the marauding hosts to drop the pace of the game until a mistake by goalkeeper Ouserir in the 40th minute gifted Obed Owusu the glorious chance.

Owusu had to only walk the ball into an empty next after Ouserir was left a journey from his goal following a mishap with his defenders.

The game headed into recess with the impressive Kotoko following at the Baba Yara Stadium left in a deserved partying mood.

Kotoko almost doubled their lead at the restart when Ahmed Toure’s long range strike threatened to catch Mohammed Ouserir off-guard but the goalkeeper was alert this time to the threat.

With Eulma growing in confidence and playing with more urgency, coach David Duncan withdrew Emmanuel Asante for Dauda Mohammed to shore up things in the middle of the park.

Frank Sarfo Gyamfi was also moments later tossed in for the obviously tiring Richard Mpong but yet still Kotoko looked particularly shaky at the back.

Eulma got the reward for their persistent attack by scoring the equalizer in the 61st minute through Darradja to silence the already nervy stadium.

Fans and players of Asante Kotoko were increasingly getting frustrated as their Algerian visitors go down at every opportunity to chew away precious second off the clock.

Kotoko had a penalty shout in the 75th minute after Sarfo Gyamfi tumbled in the Eulma box following a lovely exchange with Mohammed Dauda but the referee waved it off.

Gyamfi agains threatened with two minutes to the end of regulation time but his effort went agonizingly wide.

Six minutes were added after the regulation 90 but it was the visitors who took full advantage.

Eulma scored at the death of added on time to leave the hosts shell-shocked and more importantly dumped out of the CAF Champions League in yet another season on a 2-1 aggregate scoreline following the goalless draw between the sides in the first leg encounter.