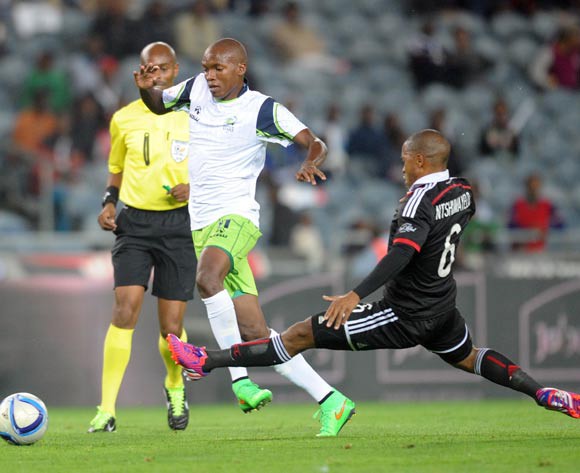 Orlando Pirates came from behind three times to deny Platinum Stars the three points when they played to an invigorating 3-3 draw at Orlando Stadium on Wednesday night.

Three goals by Mogakolodi Ngele gave Dikwena the deserved point whilst goals from Mpho Makola, Oupa Manyisa and former Dikwena midfielder Issa Sarr ensured the Buccaneers got something out of the match.

The stalemate puts the visitors at position 11 with 28 points from 24 matches on the Absa premiership log standings whilst the Buccaneers remain placed at position three with 44 points.

Although the match started on a low with fouls from both sides of the half, it was Makola who started some enterprising attacks for Eric Tinkler’s men with a free-kick in the eighth minute, but goalkeeper Kabelo Dambe was alert as he punched it.

With fouls coming from both sides, Pirates’ bench was concerned when Brighton Mhlongo went down following a collision with former Pirates man Ndumiso Mabena, however, he stood up.

A few minutes later, Mhlongo was called to action in the 28th minute with a powerful long range effort, but he saved to deny Ngele.

However, five minutes later, the Botswana international finished with his left foot to give Dikwena the lead.

In the 45th minute, Pirates continued to pile pressure on Stars’ defence and Makola’s shot found its way into the net to level matters.

With four minutes added on, Ngele bounced back to put Cavin Johnson’s men ahead when he scored from a set-piece outside the box to complete his brace.

In the beginning of the second stanza, Pirates took off in style as the captain Oupa Manyisa scored to level matters after he coolly chest trapped the ball and finished with his right.

Both sides continued to dish out attacking football and for the first time since leaving Dikwena, substitute keeper, Siyabonga Mpontshane faced Ngele and he denied him from range.

In the 68th minute, Tsotso managed to beat Mpontshane with an exquisite finish to complete his hat-trick.

Three minutes later, Bibo searched for an equaliser when he showed his class, however, his powerful shot went narrowly over Dambe’s cross bar.

With five minutes remaining on the clock, ex-Dikwena midfielder Issa Sarr found an equaliser to give his side a point with a powerful header.