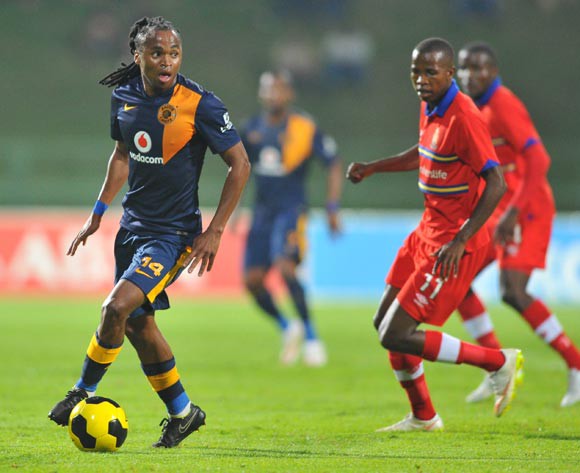 Siphiwe Tshabalala of Kaizer Chiefs challenged by Thabo Mosadi of University Pretoria during the Absa Premiership 2014/15 match between University of Pretoria and Kaizer Chiefs at the Tuks Stadium in Pretoria, South Africa on April 14, 2015

Kaizer Chiefs earned their 18th win of the league season with a 1-0 victory over the University of Pretoria in an Absa Premiership match at the Tuks Stadium on Tuesday night.

Tuks were the better team in the first half, but were made to pay for their missed opportunities in the second 45 when a spectacular free-kick from Siphiwe Tshabalala handed the Amakhosi the win.

The result sees Chiefs up to the 60 point mark in the league after 26 matches played, 13 points clear of second placed Mamelodi Sundowns who play on Wednesday night.

For Tuks their woes continue as they suffered their ninth loss of the league season and are in danger of slipping into the relegation battle with 30 points to their name after 25 games played.

The University side started brightly with Thabo Mosadi attacking down the left flank in the second minute, but his cross into the box was touched narrowly wide of goal by striker Thabo Mnyamane.

Tuks continued to control the opening ten minutes, but failed to break down the Chiefs defence.

Chiefs slowly started to find their feet as they half progressed and created their first chance on goal in the 16th minute when Reneilwe Letsholonyane played George Lebese into space on the edge of the box, but he pulled his shot inches wide from 16-yards out.

Tuks, though, were not discouraged and almost took the lead in the 18th minute when a Mnyamane latched onto a bad back header from Tefu Mashamaite, but he failed to beat the keeper in a one-on-one.

Reyaad Pieterse came to the Amakhosi’s rescue again seven minutes later when some more bad defending by the visitors allowed Thabo Mosadi to break through on goal, but he was thwarted by the keeper.

Tuks maintained their dominance for the most part after that, but suffered a small hiccup in the 38th minute when Atusaye Nyondo had to replace an injured Geoffrey Massa.

Chiefs were on the attack early on in the second half with Tsepo Masilela playing Lebese into space 14-yards out two minutes after the restart, but he saw his shot acrobatically tipped around the post by the Washington Arubi.

Lebese found himself in space again ten minutes later, but again he failed to take advantage as he fired wide from 18-yards out.

On the hour mark Willard Katsande came close to scoring when he met a left-sided free-kick, but his header went wide of the Tuks goal.

In the 70th minute the Soweto club did open the scoring when Siphiwe Tshabalala brilliantly curled home a 24-yard free-kick to give his side the lead, 1-0.

Tuks tried to find their way back into the game, but Chiefs kept it tight at the back to pick up their 18th win of the season.