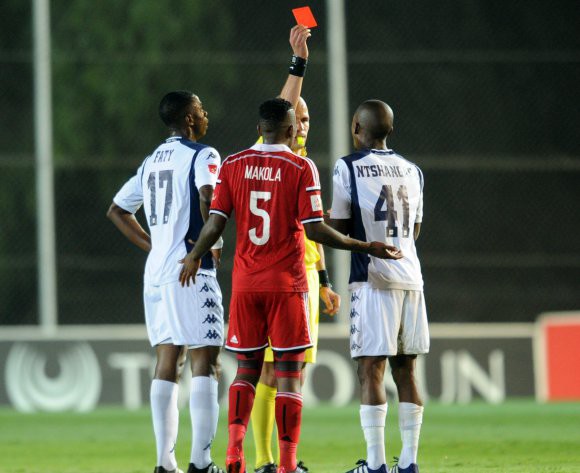 Following his red in their 2-0 win against Orlando Pirates on Tuesday night, Bidvest Wits midfielder Phumlani Ntshangase has since issued an apology.

The Buccaneers succumbed to Gavin Hunt’s men when Calvin Kadi capitalised on a defensive error as early as the second minute and he netted his second in the 16th minute.

Although they’re equal with the Buccaneers with 44 points, the Clever Boys are placed at position four on the Absa Premiership standings behind Eric Tinkler’s men.

With six minutes to go, Ntshangase was shown his marching orders after what the referee, Victor Gomes, saw as a dangerous tackle on Lennox Bacela in the heart of the midfield.

“I am really not happy about what happened tonight. To all the Bidvest supporters, players and coaches I would like to apologise,” said Ntshangase on his Facebook page.

“I was fighting for the team unfortunately it happened. God knows why this happened, He knows our tomorrow, our future.

“He knew days ago that on this day it going to be like this. I love u (sic) all guys and may u (sic) all be Blessed.”

Gavin Hunt will have to do without the Durban-born player as they face Chippa United this weekend and Free State Stars on April 29.