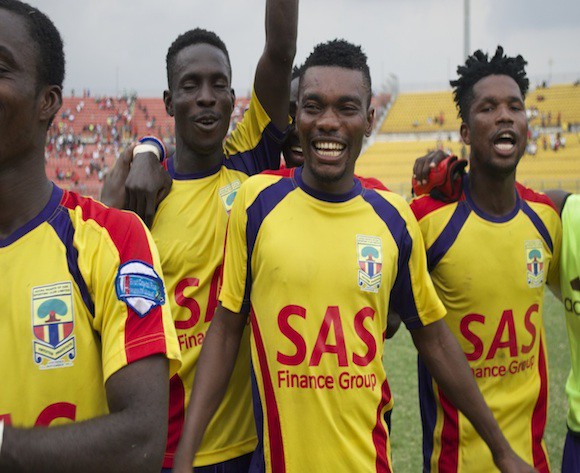 Great Olympics held rivals Hearts of Oak to a pulsating 0-0 stalemate in the Ghana Premier League on Sunday at the Accra Sports Stadium.

It was a game that sold out entertainment to fans who trooped to the national Wembley but  both sides missed glorious chances.

Referee J A Amenya also took some sticks from the fans after he disallowed a legitimate penalty won contested by Hearts of Oak in the early minutes of the first-half.

Gilbert Fiamenyo was presented with the best chance of the game in the final minutes of the but he blasted his effort wide with only Richard Kingson to beat.

Isaac Mensah and Richard Yamoah dazzled for Hearts while Attram and Kwame Boateng caused problems for the Hearts defence though Ivorian Robin Gnagne was voted Man-of-the-match.

Over 10,000 fans turned up at the Accra Sports Stadium to back the two teams with Hearts of Oak fans overshadowing their cross-city rivals.

The Phobians made an early statement of intent impressive exchanges on the flanks between Yamoah and Mensah though they couldn’t directly test Richard Kingson.

Hearts’ early minutes perpetual pressure resulted in an obvious penalty call which was overlooked by referee J A Amenya. Yamoah rolled a pass to Kumi inside the box. Ofotsu’s attempted clearance went bad as he missed the ball and rather felled the winger. The surprise of Hearts fans, the centre referee waved for play to continue.

That did not deter Hearts as they continued to their search for the opener. Laryea weighed in a long cross from midfield, Kumi sneaked between Ofotsu and Arthur to go clean on goal but the on-rushing Kingson closed the gap and the former Ghana U20 invitee sent his effort wide.

While the first-half wore on Olympics came into the picture with Attram, Doestse and Kwame Boateng all coming close.

In one instance, Doestse sent a cruising header which Soulama palmed away with feline agility.