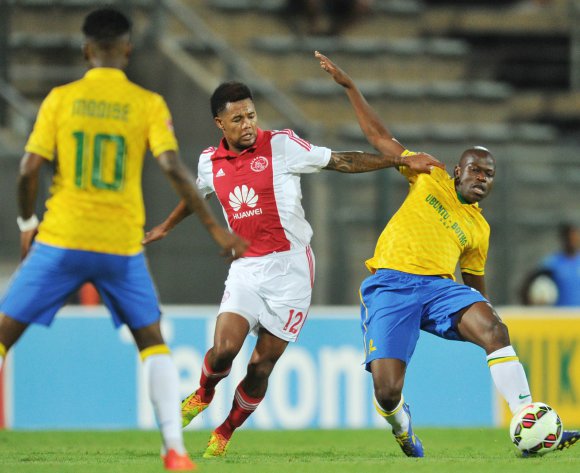 Ajax Cape Town and Mamelodi Sundowns will battle for Nedbank Cup glory when they meet in the final at Nelson Mandela Bay Stadium on Saturday, 16 May 2015, kick-off at 15h00.

Ajax have advanced to the final following victories over Mainstay United (9-1 away – the biggest winning margin in the competition this year), Bloemfontein Celtic (1-0 home), Bidvest Wits and SuperSport United (both 2-1 at home).

Ajax and ‘Downs have met in eight previous cup matches. The Tshwane side has three outright wins compared to two for the Capetonians, though the three drawn matches have all gone to penalties and been won by the Urban Warriors.

The teams’ most famous cup meeting was in the final of the 2007 Absa Cup (the predecessor to the Nedbank Cup). Goals from Bryce Moon and Franklin Cale took Ajax to a 2-0 victory and secured their first and only National Cup trophy.

This final will represent a third successive Nedbank Cup meeting between the teams in as many seasons. The Brazilians won 1-0 in the first round of both the 2013 and 2014 editions of the tournament, and a hat-trick would secure them a fourth National Cup trophy, adding to their successes in 1986, 1998 and 2008.

In all, the teams have met in 40 league and cup matches since Ajax’s formation in 1999. The Tshwane side has 15 wins compared to 12 for the Cape Town club, while 13 matches have been drawn.

The teams have met twice this season in the league. A Travis Graham goal took the Urban Warriors to a 1-0 home win in the first half of the campaign, while the Brazilians claimed revenge with a 2-1 victory in the return game in Pretoria thanks to goals from Alje Schut and Teko Modise.