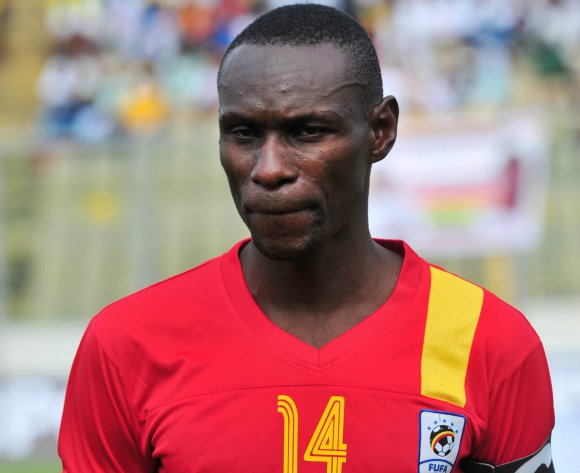 Mwesigwa Andrew of Uganda at the Afcon Qualifiers

Coach Gavin Hunt’s side that finished third in the just concluded Absa Premiership reportedly tied the experienced defender to a three year contract. The defender is only waiting to be unveiled him next month.

On his facebook account, the player posted..“ If it was marriage, I would announce to the public that am now engaged to such a lady and my wedding is next month and the marriage is based on a contract for 3 yrs till 2018, So now it's football and am announcing to public that am now contracted to ...........football club and am being unveiled to the fans next month.”

Mwesigwa has been without a club since November last year when his contract with Kazakhstan Premier League side FC Ordabasy was not renewed.

He made his first professional move in 2006 when he joined Iceland club ÍBV before switching to Chinese side Chongqing Lifan in 2010. In February 2011 he signed a two-year contract with Kazakhstan Premier League side FC Ordabasy where he has been since then.

Other Ugandan players who feature in the Absa Premiership include; Dennis Onyango (Mamelodi Sundowns), Ivan Bukenya (Kaizer Cheifs) and striker Geoffrey Massa who moved from University of Pretoria to Bloemfontein Celtic last week.