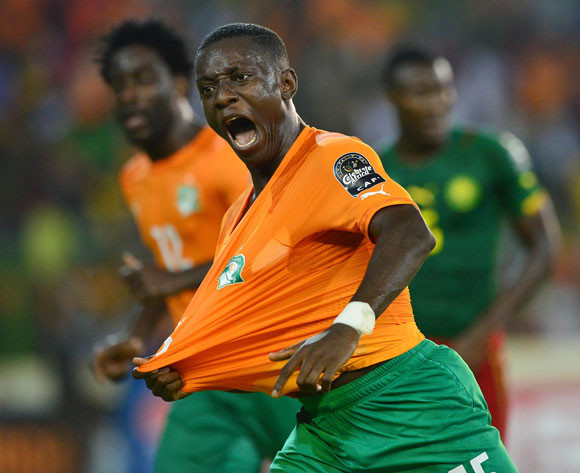 Ivoirian winger Max-Alain Gradel and Ghanaian pair of André and Jordan Ayew had an outstanding season in front of goal in the French Ligue 1.

The trio is topping the African scoring chart at the end of a campaign that saw Paris Saint-Germain retain their national crown ahead of rivals Olympique Lyonnais and AS Monaco.

Gradel ended the season with 17 goals and 3 assists to his name for AS Saint-Etienne, finding the back of the net on thirteen occasions in his last ten league appearances.

And while the 27-year-old Côte d’Ivoire international is set for a move to the English Premier League this summer, four years after joining the ten-time France champions from Leeds United, he has not ruled out to extend his journey at Stade Geoffroy-Guichard.

“I am fortunate to play for a club like Saint-Etienne. It gives me a lot of pleasure. I could finish my career here. England? Yes, I like England, of course, but I can also stay,” Gradel told beIN Sports after leading his side to a 2-1 win over Guingamp with a brace, in their final game of the campaign on Saturday.

Black Stars duo Jordan Ayew and brother André are completing the podium, with 12 and 10 goals under their belt respectively.

The FC Lorient’s 23-year-old striker also enjoyed 6 assists this season, while the Olympique Marseille’s all-rounder scooped the prestigious Marc-Vivien Foé award for his incredible work rate in the midfield and around the box.

André is also set for a Premier League move after bidding Marseille an emotional goodbye on Saturday at Stade Vélodrome, with Liverpool and Tottenham especially interested in landing the second-born son of Abedi Pelé.

While former Côte d’Ivoire boss and future Lille manager Hervé Renard has made Jordan his top summer target in the north of France.

It has been an emotion-packed season for the African trio, with Gradel facing the Ayew brothers at Estadio de Bata in the 2015 Africa Cup of Nations’ final on 8 February.

André and the Ivoirian started the game, and Jordan only came in as an extra-time substitute for Kwesi Appiah.

And while Gradel was left out of the dramatic penalty shootout after being substituted in the 67th minute, he was the one left with a smile as the Elephants claimed their first continental silverware in 23 years.