Namibia through to Cosafa final 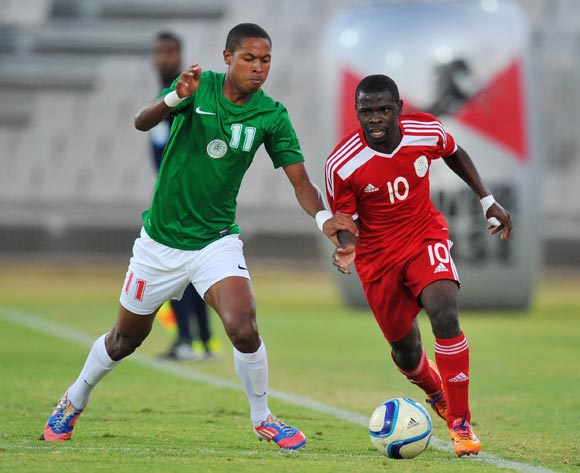 Wangu Gome of Namibia challenged by Rakotoharimalala Martin of Madagascar during the 2015 Cosafa Cup Plate Semi Finals match between Zambia and Ghana at Moruleng Stadium, Rustenburg on the 28 May 2015

A brace by Benson Shilongo and a solitary strike courtesy of Peter Shalulile handed Namibia a 3-2 win over Madagascar at Moruleng Stadium on Thursday, as they booked themselves a spot in the 2015 Cosafa Cup final.

Madagascar fired on all cylinders from as early as the third minute when Sarivahy Vombola sent a teasing low cross which was missed by Michel Randriamanja.

Ricardo Manetti’s men settled into the game after 10 minutes of play, however, Shilongo missed a great opportunity one minute later following a cross by Deon Hotto down the left, to the amazement of the crowds as the attacker failed to at least hit the target.

However, in the 18th minute Shilongo made amends and netted after a few misses as he bundled the ball into the net, handing the Brave Warriors the lead.

The Namibians didn’t celebrate for too long, as Frank Rajaonarisamba’s men equalised in the 22nd minute through Vombola after an error at the back.

Five minutes later, another costly mistake gave the Islanders an opportunity they couldn’t resist when Vombola bagged his brace to take the 2-1 lead.

The Namibians pushed for an equaliser and kept the Barea under pressure. In the 29th minute, they won a free-kick from 30 metres out but Katjiukua headed over the bar with the goalkeeper, Jean Dieudonne, beaten.

In the 32nd minute, towards the interval, Shilongo bagged his brace as well after a great set up by the Golden Arrows forward Hotto. The score was 2-2 at half-time and in the second stanza the search for a winner continued from both sides.

Manetti’s message in the tunnel seemed to have worked wonders, as his side showed urgency in 77th minute when they exchanged some good passes on the edge of the box but Hotto saw his shot going high from the final execution.

The Malagasy reacted swiftly in the 79th minute when Samouri Olivier beat the Namibia offside trap and drew the keeper, Virgil Vries, off his line, but his effort was cleared by Chris Katjiukua.

With six minutes to go, Namibians grabbed the lead again when Peter Shalulile made up for a horror miss earlier on with a blast into the top of the net to book their spot in the final.

Manetti's men will wait for the winner between Botswana and Mozambique in the final match of the Southern African regional showpiece.