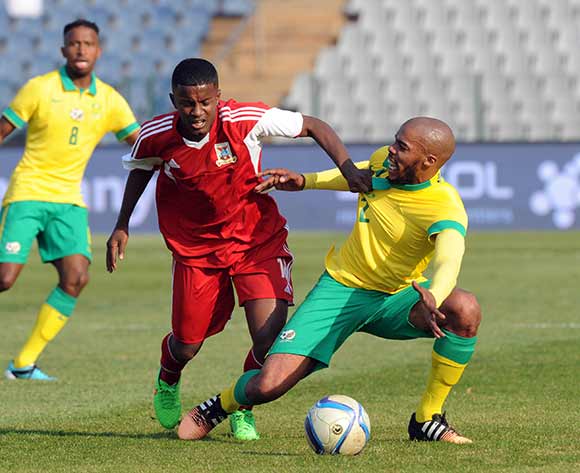 Bafana Bafana led 3-0 from the first leg in Soweto last month and completed a 2-0 victory at the Anjalay Stadium to make it 5-0 across the two matches. They will face Angola in the final round of qualification in October later this year.

Here are the match events as they happened:

84' - GOAL! Mauritus 0-2 South Africa - Letlabika scores a lovely goal after combining with Mabena, finding the back of the net with a low shot after a powerful run through the middle of the defence!

81' - Less than 10 minutes to play now, South Africa are 4-0 up on aggregate and set to face Angola in the next round of qualifiers.

69' - GOAL! Mauritius 0-1 South Africa - Finally the deadlock is broken, Masango's deflected effort from a free kick finds its way into the back of the net and Bafana Bafana lead!

67' - Fantastic save from goalkeeper Louis to keep out a strike from Twala!

63' - SA substitution - Mabena replaces Ntshangase up front for the visitors.

61' - Twala shoots from the edge of the box... off the underside of the crossbar! So close to the opening goal.

60' - A couple of chances in quick succession for Mauritius, but their attackers lack the confidence to find the net.

55' - Ten minutes into the second half, and it's much the same story as the first: South Africa on top, the hosts looking to hit on the counter.

46' - Back underway in the second half, no substitutions from either side at the break.

42' - Much better from Bafana and Gabuza shoots just wide of the goalkeeper's right-hand post with an effort from the 'D' of the box.

39' - Nyatama with a long-range shot, but it's way off target. Bafana continue to underwhelm...

30' - Bafana Bafana are unable to put together the kind of combination play they would like, and Mauritius are gradually growing in confidence.

23' - Midway through the first half, still goalless between Mauritius and South Africa.

18' - Corner kick for SA and the cross causes some confusion in the Mauritian defence before they eventually get the ball clear.

14' - A worry for Bafana as Gabuza stays down after picking up a knock, but he's soon back on his feet and okay to play on.

9' - Comfortable dominance from South Africa, though they have yet to really test the home side's goalkeeper.

2' - Yellow card - A Mauritius defender receives an early caution for a late challenge.

1' - Kick-off - We are underway, with Mauritius wearing red and white, while SA are in yellow and green. Masango with a long-range shot that is off target, early effort from the visitors.