Bafana ease into next round of CHAN qualifiers 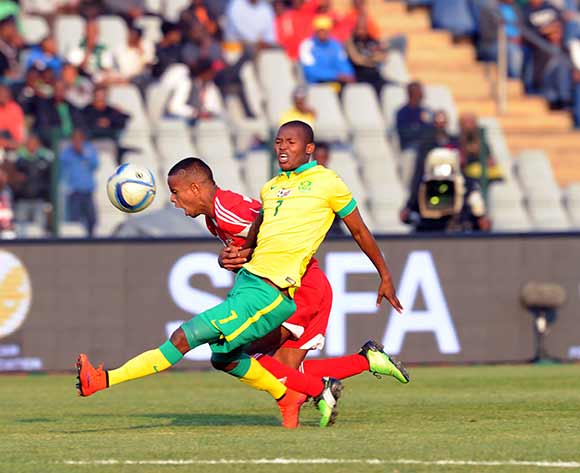 South Africa sealed their place in the final round of qualifiers for the 2016 African Nations Championship (CHAN) with a 2-0 win away to Mauritius at the Anjalay Stadium in Belle Vue Maurel on Sunday afternoon.

Added to a 3-0 victory in the first leg in Soweto last month, the result sees Bafana Bafana win the preliminary round tie 5-0 on aggregate. They will now face Angola in a two-legged tie in October, with the winners booking a place in the tournament in Rwanda early next year

Shakes Mashaba’s side comfortably dominated possession, but a combination of poor finishing and some fine goalkeeping by Mauritius’ Kevin Jean-Louis saw the game remain scoreless for the better part of 70 minutes.

The closest Bafana came to a goal was an effort from winger William Twala which rebounded off the underside of the crossbar and was then almost turned into his own goal by a defender, while the hosts occasionally threatened on the counter attack but never really tested ‘keeper and captain Itumeleng Khune.

The deadlock was finally broken in the 69th minute when former Kaizer Chiefs winger Mandla Masango shot on goal direct from a free kick – the ball deflected on its way through the defensive wall and wrong-footed Jean-Louis, who was powerless to stop it finding the back of the net.

Wandisile Letlabika made it 2-0 in the 84th minute, driving through the middle of the defence before exchanging passes with Ndumiso Mabena and then easily shooting low past the goalkeeper’s left-hand to wrap up the scoring.