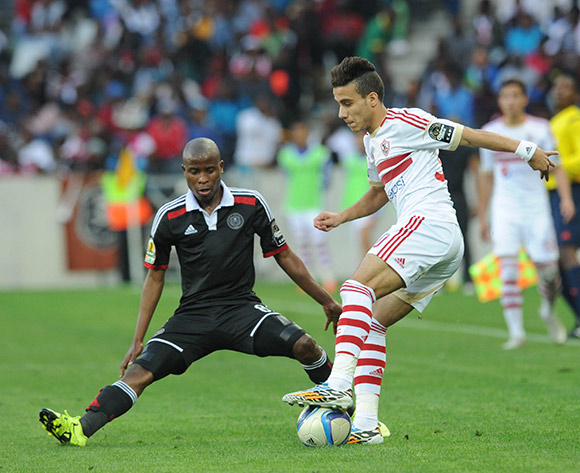 Welcome to AfricanFootball's as-it-happened coverage of CAF club football from around the continent on Sunday 26 July.

The schedule included the following matches:

The action as it happened:
All times CAT

That concludes our live coverage for Sunday evening, we'll have a report on the Moghreb Tetouan v Al Hila match just as soon as it is completed.

22h21 - Full time in Sfax, Pirates win 1-0 and strengthen their grip on second place in Group B, while Sfaxien remain on one point from three matches. It's also half time in Morocco, where Tetouan and Al Hilal are locked at 0-0.

22h17 - Erasmus hits the post from an open-goal chance! Into injury time in Sfax, that should have killed it off!

23h11 - Rami makes a clutch save from Erasmus to keep Sfaxien in the game! In Morocco, it's still goalless late in the first half between Tetouan and Al Hilal.

23h06 - Pirates need Mhlongo to make a couple of good saves in succession as Sfaxien push for a late equaliser! Ten minutes of regulation time to play.

22h55 - Past the midway point of the first half in the Champions League match between Tetouan and Al Hilal, while Sfaxien are still 1-0 down at home to Pirates in the Confed Cup, with just over 20 minutes to play.

22h47 - Past the hour mark in Sfax, Pirates remain 1-0 up against their Tunisian hosts.

22h33 - Goal in Sfax! Pirates take the lead, with Thabo Rakhale scoring an exquisite chip over the advancing goalkeeper!

22h31 - Back underway in Sfax, no changes from either side at the break.

22h07 - Myeni tumbles in the penalty area under a challenge from behind but the referee ignores Pirates' pleas for a spot kick! That was very, very lucky for Sfax... that could easily have been a penalty and a red card.

22h00 - Up the half hour mark in Sfax, it remains goalless between the 'Juventus of the Arabs' and the 'Buccaneers'.

21h50 - It's Sfaxien who are playing with confidence now, though they have yet to really test Pirates gloves-man Mhlongo.

21h42 - The first genuine chance of the game sees Majoro clean through on goal, but Sfaxien goalkeeper Rami makes a vital save!

21h30 - Kick off in Sfax, at the Taieb Mhiri Stadium. It's CS Sfaxien in their traditional black and white, while Pirates don a change strip of all red.

21h21 - Full time in Cairo, Zamalek win 2-0 to move to nine points at the top of Group A in the Confed Cup. Leopards drop to the bottom one one point and now with an inferior goal difference to Sfaxien.

21h10 - The White Knights are cruising to victory now, with less than 10 minutes to play of regulation time.

20h36 - Back underway in the second half in Cairo between Zamalek and Leopards.

20h08 - Goal in Cairo! It's now 2-0 to Zamalek, with Ayman Hefni scoring from the penalty spot to double the hosts' advantage!

19h50 - Up to the 20 minute mark in Cairo, where Zamalek lead AC Leopard 1-0. The Egyptians are chasing a third successive win, which would see them move to within touching distance of the semifinals.

19h35 - Goal in Cairo! Zamalek claim an early lead, with Bassem Morsi netting for the White Knights in the second minute of the match to make it 1-0!

19h30 - We are underway in the Confederation Cup Group B match between Zamalek and AC Leopards in Cairo.