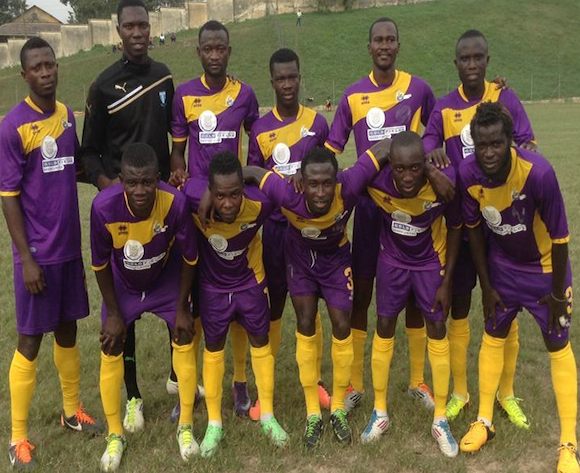 Bismark Oppong climbed off the bench to win the 2015 MTN FA Cup for Medeama SC with his first touch as the Tarkwa-based side pipped holders Asante Kotoko 2-1 on Sunday.

Seikwa-born midfielder Akwasi Donsu powered the Mauves into the lead with a 39th minute goal superb finish from inside of the box.

But Ahmed Toure restored parity for the Porcupine Warriors before Oppong climbed off the bench to score the match-winner for Medeama in the 67th minute.

There was a moment of confusion when A.S Malik controversially flagged to disallow a Richard Mpong goal which appeared legitimate.

Medeama held on to their lead and created a host of chances but they failed to increase their tally.

Jackson Owusu and Michael Akuffo played in central midfield while Eric Donkor and Frank Sarfo Gyamfi were placed on the flanks to provide supplies.

Duncan’s Medeama counterpart Tom Strand responded to his tactics by naming the tough-minded Muntari Tagoe in goal with a crop of former Ghana U20 players including, Jacob Apau and Kwame Donsu all named in the line-up. Workaholic midfielder Malik Akowuah, Ebenezer Adjei and Eric Kwakwa.

Medeama shaded possession at opening minutes of the halve with Apau and Donsu overshadowing the Kotoko midfield.

Kotoko switched the game in their favour on the quarter of an hour mark and Ahmed Toure could have shot them ahead but the Ivorian-born Burkina Faso international fluffed his lines by skying his effort from close range.

After the miss, Medeama resumed their dominance and threatened the goalmouth of Kotoko and perpetuated their machination though Obed Owusu sneaked up on them and came close twice.

However Kotoko’s jack-where-are-you defensive mishaps could not hold up Medeama any long and Donsu fired them ahead.

Former Ghana U20 winger Jacob Apau picked the pocket of Ahmed Adams on the flanks before locating Donsu who grabbed his third goal of the competition with a superb left-footed drive which sailed unstoppably to the right side Isaac Amoako’s net.

Eric Donkor with a delicious cross from the right and Ahmed Toure headed home with a blistering effort. Defender Evans Quao could only stand and admire the power with which the Burkina Faso international finished off the move and restore parity for the Porcupine Warriors.

Medeama showed their fury by going for goal in the opening minute of the half. Midfielder Eric Kwakwa broke free on the right and targeted the right with a great drive but he was denied by the goal post.

The Tarkwa-based side continued piling the pressure on Kotoko causing Ahmed Adams and Abeiku Ainooson to commit defensive errors.

Tom Strand shuffled his cards and introduced Bismark Oppong and the midfielder had the leader in his gags. Benjamin Bature did a rivaldo to outsmart Ainooson before skiing a pass to Oppong. The fleeting attacking midfielder sensibly chipped the ball to beat Joseph Addo in the goal to restore Medeama’s lead.

Richard Mpong tried repeating his substitution magic for Kotoko and he succeeded putting the ball at the back of the net but referee Joseph Lamptey ruled out the goal.