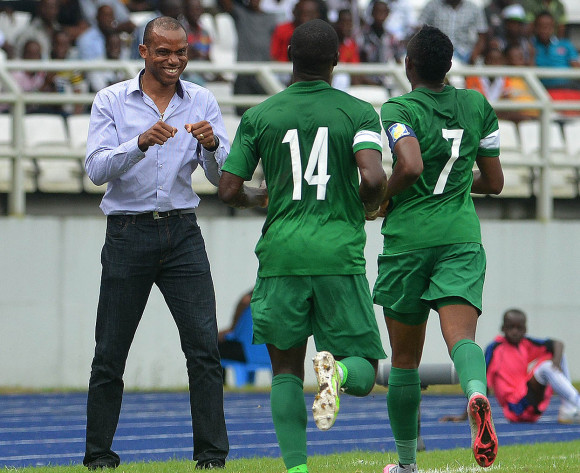 Oliseh and his skipper Ahmed Musa (No. 7)

The president of the Nigeria Football Federation (NFF), Amaju Pinnick, has announced the country will play two friendlies against Cameroon and Congo next month in Belgium.

“I can confirm that we will play against Congo on October 8 in Antwerp and against Cameroon on October 11 in Brussels,” Pinnick said on a television interview programme on Monday.

This confirms an AfricanFootball.com scoop that the NFF were working on a series of friendlies next month in Belgium.

Incidentally, Congo denied Nigeria a chance to feature at the 2015 AFCON in Equatorial Guinea when they finished second behind South Africa in their qualifying group.

Nigeria lost 3-2 to the Red Devils in Uyo, but they avenged this defeat by winning 2-0 in Pointe Noire.

However, the Eagles failed to beat South Africa at home to reach Equatorial Guinea 2015.

The NFF president further announced the federation are considering another friendly against a North African team before they clash with Egypt in March in continuation of the 2017 AFCON qualifiers.

Pinnick mentioned Tunisia and Algeria as possible opponents for this match likely to be in November.

Egypt lead Group G of the AFCON qualifiers with six points from two matches, while Nigeria are second on four points.

Both countries are to clash in a double header at the end of March in what many believe will determine the automatic qualifiers for Gabon 2017.