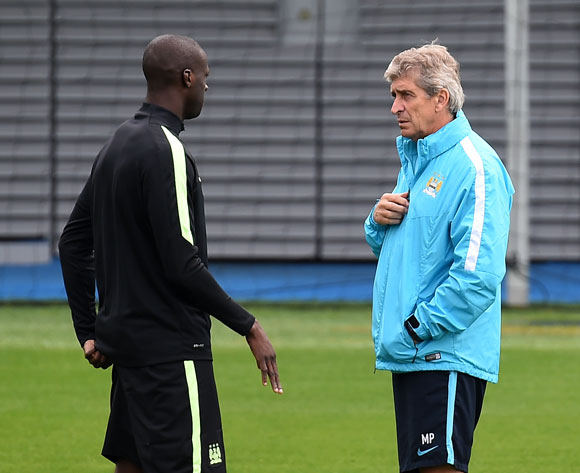 Manchester City's Yaya Toure applauds the fans after being substituted

AfricanFootball.com provided LIVE coverage of African players' performances in the major European leagues and CAF club competitions for Saturday 26 September - See it as it happened.

22h40 - Kalidou Koulibaly (Senegal) Faouzi Ghoulam(Algeria) are on the winning side as Napoli beat Juventus 2-1 in the Italian Serie A.

22h25 - Napoli are leading Juventus 2-1 in the Italian Serie A with ten minutes to play.

22h00 - In the French Ligue 1, Tunisian Wahbi Khazri was influential in Bordeaux's 3-1 win over Lyon, scoring one goal and creating two. Emmanuel Imorou (Benin) found the back of the net in Caen's 2-0 win over Ajaccio. Fallou Diagne (Senegal) rescued a point for Rennes with his goal as they drew 1-1 with Troyes.

21h50 - Yacouba Sylla (Mali) has been shown a red card which sees Rennes reduced to ten men against Troyes in their French Ligue 1 match which is locked at 1-1.

21h30 - Fallou Diagne (Senegal) has equalised for Rennes against Troyes in their French Ligue 1 match which is locked at 1-1.

21h15 - Emmanuel Imorou (Benin) has found the back of the net for Caen to give them a 2-0 lead over Ajaccio in their French Ligue 1 match.

21h05 - Al-Merreikh have taken the lead against Mazembe in their CAF Champions League, first leg semifinal thanks to a goal from Francis Coffie.

20h52 - There are two Africans in the Napoli's starting XI against Juventus in the Italian Serie A. Kalidou Koulibaly (Senegal) Faouzi Ghoulam (Algeria) start for Napoli.

20h50 - Bordeaux lead 3-0 at the break over Lyon in their French Ligue 1 match thanks in large part to Tunisian Wahbi Khazri  who scored a goal and created two.

20h45 - Villarreal have taken the league against Atheltico Madrid. It is 0-0 at half time of the CAF Champions League, first leg semifinal between Al-Merreikh and Mazembe.

20h35 - Eric Bailly (Cote d'Ivoire) is in the starting line-up for Villarreal in their Spanish La Liga match against Athletico Madrid.

20h30 - A brace from Nigerian Bartholomew Ogbeche has helped Cambuur earn a share of the spoils against Utrecht in the Dutch Eredivisie as the match ended 3-3.

20h25 - Wahbi Khazri (Tunisia) has given Bordeaux the lead against Lyon in their French Ligue 1 match.

20h20 - Chelsea have scored to late goals to rescue a point as their English Premier League match against Newcastle ends 2-2. Schalke have beaten Hamburger 1-0 in the German Bundesliga.

20h15 - Roma have beaten Carpi 5-1 in the Italian Serie A with Gervinho (Cote d'Ivoire) and Salah (Egypt) finding a goal each.

20h10 - Real Madrid have been held to a goalless draw by Malaga in the Spanish La Liga despite the latter ending the game with ten men after Nordin Amrabat was sent off.

20h05 - The CAF Champions League, first leg semifinal between Al-Merreikh and Mazembe is underway as are five French Ligue 1 matches which we will keep you updated with.

20h02 - (Morocco) has been sent off for Malaga in their Spanish La Liga match against Real Madrid with the game still locked at 0-0.

20h00 - Schalke have taken a 1-0 lead against Hamburger in the German Bundesliga. Newcastle are leading 2-0 in their English Premier League match against Chelsea. Cambuur have re-taken the lead against Utrecht thanks to a brace from Bartholomew Ogbeche in the Dutch Eredivisie, 2-1.

19h45 - Bartholomew Ogbeche's opener for Cambuur against Utrecht in the Dutch Eredivisie has been cancelled out by Willem Janssen, 1-1.

19h30 - Roma now lead 5-1 against Carpi in the Italian Serie A. Pirates also still lead 1-0 over Al Ahly in their CAF Confederations Cup, first leg semifinal. Real Madrid and Malaga are still locked at 0-0 in the Spanish La Liga.

19h20 - Serge Aurier (Cote d'Ivoire) has scored late on to see PSG come from behind to beat Nantes 4-1 in the French Ligue 1.

19h15 - Mohamed Salah (Egypt) has scored Roma's fourth goal as they lead Carpi 4-1 in their Italian Serie A match.

19h10 - Late goals from Cavani and Di Maria have handed PSG a 3-1 lead over Nantes with five minutes remaining in their French Ligue 1 match.

19h00 - Bartholomew Ogbeche (Nigeria) has given Cambuur a 1-0 lead over Utrecht in their Dutch Eredivisie game.

18h40 - PSG have equalised against Nantes, cancelling out Yacine Bammou's opener, 1-1. Capri have also pulled a goal back against Roma to make it 3-1.

18h30 - Roma have been rampant in front of goal and now lead Carpi 3-0 with Gervinho finding one of the goals.

18h30 - Maxim Choupo-Moting and Joël Matip (both Cameroon) have started for Schalke in their German Bundesliga match against Hamburger.

18h25 - Roma have taken the lead against Carpi which has also seen Keita leave the field injured early on in the game.

18h10 - Thamsanqa Gabuza has given Pirates a 1-0 lead over Al Ahly in their CAF Confederations Cup, first leg semifinal.

17h55 - Cheikhou Kouyate has also scored for West Ham, who have drawn 2-2 away to Norwich. Liverpool have beaten Villa 3-2, Leicester suffered their first loss, going down 5-2 at home to Arsenal, Manchester United beat Sunderland 3-0, and Southampton beat Swansea 3-1. Mame Biram Diouf came off the bench to score the winner for Stoke against Bournemouth, 2-1.

17h45 - We're 15 minutes away from kick-off in the CAF Confederation Cup semifinal first leg match between Orlando Pirates and Al Ahly. You can follow live coverage of the game here.

17h30 - Rudy Gestede is also chipping for Villa, scoring both of their goals as they trail Liverpool 3-2 at Anfield.

17h22 - We also have another African scorer in the Premier League, with Sadio Mane making it 3-0 to Southampton against Swansea.

17h20 - Ten minutes away from the early kick-off in France's Ligue 1. Nantes, who have Biram Toure, Jules Iloki and Yacine Bammou in their starting XI, host Serge Aurirer's PSG.

17h05 - Back underway in the Premier League games. Meanwhile, in Germany, still no African scorers, while Barcelona are 1-0 up at home to Mubarak Wakaso's Las Palmas in the early La Liga game.

16h35 - Scratch that last comment, Diafra Sakho has scored for West Ham to level the game at 1-1 away to Norwich.

16h31 - Past the half hour mark in England, no African scorers as yet.

16h18 - Half time in the five Bundesliga matches, no African scorers as yet. In England, Theo Walcott has scored for Arsenal to make it 1-1 against Leicester City.

16h13 - Leicester have taken the lead against Arsenal thanks to Jamie Vardy, Norwich lead at West Ham and Liverpool are a goal up against Villa.

16h00 - Underway in the Premier League and La Liga, with African players looking to grab headlines in some of the biggest leagues in the world.

15h50 - There's also an early game in Spain's La Liga, with champions Barcelona hosting Las Palmas at 16h00. The visitors have Ghana's Wakaso Mubarak in their starting line-up, while Moroccan winger Zabil El Zhar is on the bench.

15h45 - Team news from the Premier League: Riyad Mahrez and Jeff Schlupp start for Leciester at home to Arsenal; Idriss Gueye and Rudy Gestede start for Villa at Liverpool; Mame Biram Diouf is on the bench for Stoke against Bournemouth; Victor Moses, Cheikhou Kouyate and Diafra Sakho start for West Ham at home to Norwich, who have Sebastien Bassong in their XI; and Sadio Mane and Victor Wanyama come up against Andre Ayew in the Southampton v Swansea match.

15h36 - It ends 4-1 to Tottenham Hotspur over Manchester City, with Clinton Njie giving an impressive cameo for the host team.

15h20 - And Njie has an immediate effect on the game, providing an excellent  assist for Erik Lamela to make it 4-1.

15h19 - Cameroon's Clinton Njie comes off the bench for Spurs, who are 3-1 up at home to Man City with about 15 minutes of regulation time left to play.

15h15 - Team news from the Bundesliga, where Salif Sane of Senegal starts for Hannover away to Wolfsburg. Serey Die of the Ivory Coast starts for Stuttgart at home to Monchengladbach, Nigeria's Anthony Ujah starts for Werder Bremen at home to Leverkusen and his compatriot Leon Balogun is on the bench for Mainz for their match at home to Bayern Munich.

15h02 - Harry Kane breaks his duck to make it 3-1 to Spurs over Manchester City, who look to be heading for a second successive league loss.

14h58 - Yaya Toure is subbed off for Manchester City, with the Ivorian suffering an injury which has seen him replaced by Jesus Navas.

14h52 - And Spurs now have the lead at 2-1, with Toby Alderweireld heading the home side into the ascendancy.

14h32 - In fact, Spurs have just levelled the game at 1-1 after a great strike by Eric Dier... and that's half time at the Lane. Tottenham have Cameroon attacker Clinton Njie on their bench.

14h30 - We begin in London, with the Premier League match between Tottenham Hotspur and Manchester City at White Hart Lane. Yaya Toure has been at the heart of the visitors' best play, with City 1-0 up thanks to a 25th minute goal by Kevin De Bruyne.