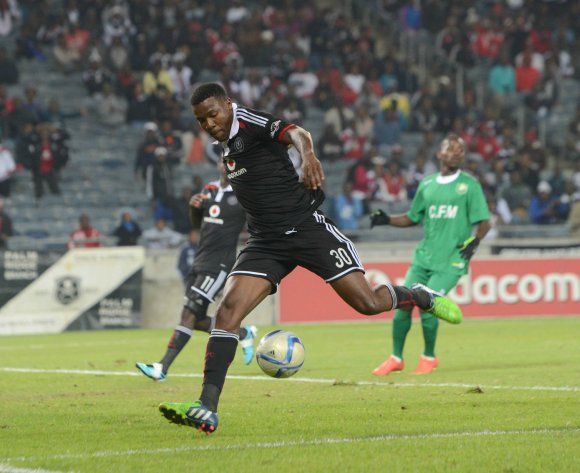 Thamsanqa Gabuza of Orlando Pirates during the CAF Confederation Cup

Welcome to the as-it-happened wrap of the CAF Confederation Cup first leg semifinal clash between Orlando Pirates of South Africa and Egyptian giants Al Ahly. The Buccaneers claimed a 1-0 win thanks to an early goal from Thamsanqa Gabuza.

90+3' - FULL TIME. Pirates 1-0 Ahly. It ends 1-0 to the Buccaneers, who will have their work cut out to defend that lead in the return leg in Egypt next weekend.

90' - There will be three minutes of added time.

87' - Myeni has gone down under a challenge and is receiving treatment... seems to be a bit of play-acting/time-wasting from the home side.

84' - A couple of corner kicks in quick succession for Ahly, before Malick Evouna shoots high and wide.

77' - Thabo Matlaba shoots on goal, Sherif Ekramy makes a relatively comfortable save. The Bucs man had options for a pass which would probably have been a better choice...

69' - Pirates are finally coming out of their shell in the second half, they can't just sit back and allow the Egyptians to dominate.

64' - Thus far Rooi Mahamutsa has been immense in defence for the Buccaneers.

60' - It's all Al Ahly at the moment, the visitors look sure to find an equaliser soon or later...

56' - John Antwi sets up Abdallah El Said to shoot, but the attacker fires his effort way over the target.

54' - Pirates on the counter attack, the ball falls for Thabo Matlaba on the edge of the box but he volleys his shot over the crossbar.

52' - Inventive play from Ahmed Fathy, with Ahly looking far more dangerous in the second half, but so far Pirates have been solid defensively.

48' - Felipe Ovono comes off his line to make a crucial interception ahead of Malick Evouna.

46' -Back underway in the second half...
Ahly substitution: Malick Evouna replaces Mohamed Hany.

45+2' - Half time. Pirates 1-0 Ahly. There's the whistle for the break, it's the Buccaneers who hold a slender advantage after their early goal from Thamsanqa Gabuza.

43' - John Antwi with a quick turn and shot, but it's well off target and no trouble for the goalkeeper.

39' - Great defending from Mohamed Naguib, as he slides in to win the ball cleanly from Sifiso Myeni.

35' - Al Ahly have grown into this match, though the pace of Pirates means they still pose a significant goal threat.

30' - John Antwi with a chance to level for Ahly, but Felipe Ovono touches the ball onto the bar and the rebound is cleared by Ntsikelelo Nyauza!

27' - The 'keeper receives some treatment, but is soon okay to continue.

23' - Midway through the first half, 1-0 to Orlando Pirates and the South African side has been good value for the lead.

20' - Sherif Ekramy makes an excellent save to keep out a shot direct from a free kick by Mpho Makola!

16' - Ahmed Fathy with a shot from the edge of the box, but he doesn't trouble Felipe Ovono.

12' - Pirates have had some joy down their left flank, getting in behind Ahly right-back Mohamed Hany with relative ease.

9' - GOAL! Pirates 1-0 Ahly. Thamsanqa Gabuza gives Bucs the lead, getting to Kermit Erasmus' cross at the near post and touching it beyond Sherif Ekramy to make it 1-0!

8' - John Antwi with a team header which is easy for Felipe Ovono.

6' - Abdallah El Said with the first shot in anger for the visitors, but he scuffs a volley wide of the mark.

3' - Both sides still looking to settle down and find their rhythm early on in this match.

1' - Kick off at the Orlando Stadium. Pirates wear all-black, Ahly are in red and white.