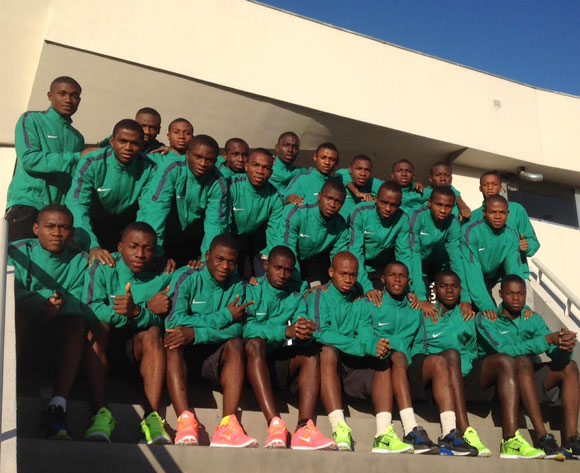 The details of the pre-World Cup friendly on Tuesday between Nigeria U17s and their counterparts from Argentina have been released.
The test match for the two teams who will feature at the FIFA U17 World Cup in Chile will be staged at the Argentina Football Association (AFA) Training Centre in Ezeiza, Buenos Aires.
The match, which is part of the team's preparation towards the FIFA U-17 World Cup Chile 2015, will kick off at 3:30 pm local time (7:30pm Nigerian time).
In the meantime, Golden Eaglets assistant coach, Kabiru Baleria, has yet again heaped plaudits on the Nigeria Football Federation (NFF) over its choice of Buenos Aires Football (BAF) as the training camp for the national U-17 team ahead of U-17 World Cup finals.
The Emmanuel Amuneke -led side have spent few days at the idyllic BAF complex owned by former Argentine international, Matias Almeyda and Baleria said the quiet environment has added value to the team's preparation, even as players battle for competition.
"It is nice we are here for our preparation towards the World Cup in Chile," said Baleria. "The boys are happy and you can see the excitement on their faces since we arrived here in Buenos Aires."
The team have been training twice daily since arriving on Friday and the coaches are delighted at the keen competition in camp.