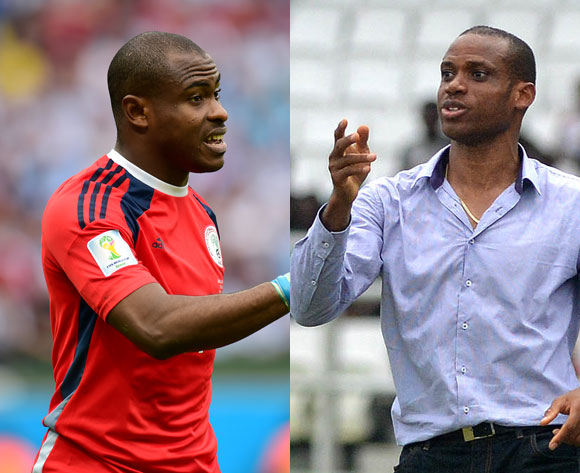 Enyeama, Oliseh - No longer at ease

Has the managerial inexperience of Super Eagles coach Sunday Oliseh now caused a huge rift and disaffection in his dressing room following the way and manner he handled the Vincent Enyeama drama on Tuesday night in Belgium?

The official clarification simply said “a little misunderstanding” in the Eagles camp has been “resolved”.

But that is far from the truth.

The bone of contention was the Eagles captaincy and Oliseh was to inform Enyeama he was no longer captain of his team and that Ahmed Musa will now wear the captain’s arm band.

The Eagles coach did so at a team meeting during which he shouted down on the Lille shot stopper and even threatened to call in security to restrain a very agitated Enyeama.

It is a badly kept secret that Enyeama’s international future has been under serious scrutiny since the drama that preceded a 2017 AFCON qualifier in Kaduna in June.

Enyeama had expressed fears over the safety of Kaduna to stage this match at a time the activities of the terrorist organisation Boko Haram were becoming a lot more daring and deadly in the northern part of the country where Kaduna is situated and which has also been hit by the terrorists.

He was subsequently queried and at the height of indiscipline he tore the query right in front of the NFF general secretary who dared to sign such a document.

He was then invited by the NFF disciplinary committee to state his own defence and he failed to turn up, arguing that he did not get the invitation in time.

The bad blood between the NFF and Enyeama degenerated to the pages of the newspapers and as one official told AfricanFootball.com, the NFF opted for an internal resolution of this gross misconduct so as not to add more fuel to the fire.

But privately, it was agreed that Enyeama must face the music with recommendations that he be stripped of the captaincy and possibly banned from the national team.

This position appeared to be a reasonable one when the goalkeeper stayed away from the team’s AFCON qualifier in Tanzania in September. It was later learnt he lost his mother and so his absence.

It seemed all had been forgiven and forgotten when Enyeama joined the team’s training camp in Belgium on Tuesday just days after he had buried his mother.

One would have expected Oliseh to have called in Enyeama to first inform him that his new captain is Ahmed Musa and not to try and play the big boss by chiding him like a little boy and putting him down in a team meeting.

That singular act must have crushed Enyeama’s ego and it did not stop there as he was bluntly told he would not be allowed to talk at this meeting.

Despite his gross misconduct in June, Enyeama has served Nigeria with distinction and so it was not much of a surprise he is the country’s most capped international with 101 appearances.

He was one of the main reasons Nigeria won a third AFCON in South Africa two years ago and his heroics ensured the Eagles reached the knockout rounds of last year’s World Cup for only the third time in their history.

Would the disgraceful drama in Belgium had played out had Carl Ikeme not been discovered last month?