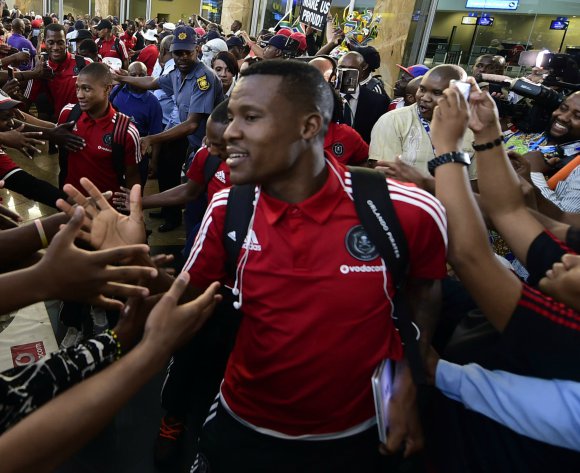 Thamsanqa Gabuza of Orlando Pirates being welcomed by fans

Following their arrival on Tuesday from Egypt, Orlando Pirates in-form striker Thamsanqa Gabuza says he doesn’t even know how many goals he scored during their continental exploits.

The former Lamontville Golden Arrows man was speaking to Kick-Off.com at OR Tambo International Airport as they landed after beating Al Ahly to reach the final of the CAF Confederations Cup.

‘Gandaganda’ was on target together with Kermit Erasmus, Thabo Matlaba and Thabo Rakhale as the Buccaneers fought back to deny the Red Devils a chance to defend their crown.

"I don't even know how many goals I have scored [in the tournament]," said Gabuza to the local South African website.

"The only important thing is to help the team win games, that's it!"

On the other hand, Erasmus added that his combination with Gabuza is paying off with the duo having scored in the Sunday’s semi-final second leg.

"Me and Gabuza share a room together, we are always together," added the ex-SuperSport United striker.

"We have a good friendship and are quite close, and playing together has brought us closer.

"For me it's always good to play with someone who knows his strength and he knows mine and I think that benefits both of us."

However, they first have to face University of Pretoria in the Telkom Knockout Cup Last 16 match.