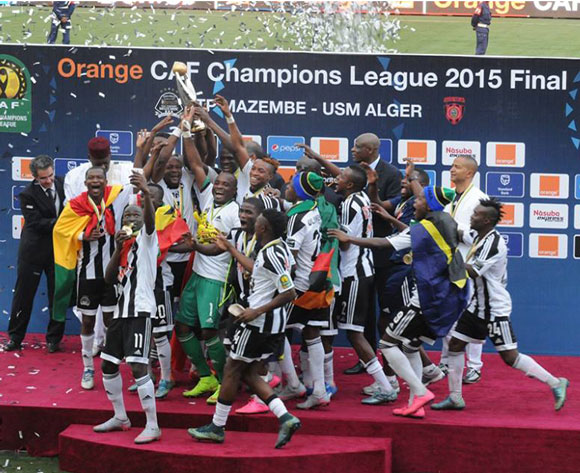 TP Mazembe claimed glory at the 2015 CAF Champions League on Sunday, after sealing a 4-1 aggregate victory over a weakened USM Alger in the final of Africa’s most prestigious club competition.

Following their 2-1 away victory in Bologhine in the first leg, the ‘Ravens’ enjoyed a 2-0 win in front of their home crowd in the return clash this afternoon, courtesy of second-half goals from Tanzania and Côte d’Ivoire internationals Mbwana Samatta and Roger Assale.

Mazembe were by far the better of the two sides in the first 30 minutes of the game, dominating possession against a well-organized Algerian outfit who were trying to catch the locals out on the counterattack.

However, the Congolese failed to convert their many opportunities, lacking efficiency in front of goal.

USMA played with a bit more enthusiasm towards the break under the guidance of Zineddine Ferhat, but made too many technical mistakes in the final third of the pitch to threaten Robert Kidiaba.

The second period began a more balanced affair between the two clubs, but we had to wait until the 62nd minute to witness the first clear-cut chance of the game when Adama Traore failed to break the deadlock with only Mansouri to beat.

But it was just a matter of time for Patrice Carteron’s men, with Tanzania international Mbwana Samatta putting his side ahead from the penalty spot on 74 minutes, following a contact between Farouk Chafai and Roger Assale inside the box.

Substitute Rachid Nadji came very close to equalizing ten minutes later, but it was the locals who ultimately added to USMA’s misery through Roger Assale in added time, after another great move from Samatta.

The DR Congo giants could start celebrating seconds from the final whistle, as Zineddine Ferhat was walking out after receiving his marching orders in a tense environment.