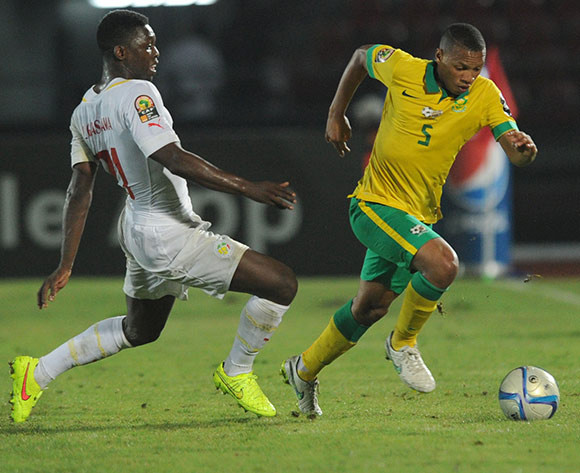 Andile Jali of South Africa battles with Lamine Gassama of Senegal during of the 2015 Africa Cup of Nations match between South Africa and Senegal at Mongomo Stadium, Equatorial Guinea on 23 January 2015 Pic Sydney Mahlangu/BackpagePix

South Africa and Angola will begin their battle for a place in the final round of qualifying for the 2018 World Cup when they meet for the first leg of their tie at Estadio Nacional de Ombaka in Benguela on Friday afternoon, kick-off at 16h30.

This will be the first match for both teams on the ‘Road to Russia’, with both Bafana Bafana and Palancas Negras looking to return to the global showpiece tournament.

South Africa have appeared in three World Cups (1998, 2002 & 2010), though the last time they properly earned their spot in the event was almost a decade and a half ago when they were still under the leadership of Carlos Queiroz (as they appeared in the 2010 finals as hosts).

As for Angola, they have not returned to the World Cup since making their debut in Germany 2006.

Bafana Bafana and the Palancas Negras have been regular combatants down the years, meeting no less than 12 times across AFCON matches (qualifiers and in the tournament itself), COSAFA Cup, friendlies and – just last month – a two-legged qualifying tie for the 2016 African Nations Championship (CHAN) which Angola won 3-2 on aggregate.

Overall, SA have six wins compared to one for Angola, while five matches have been drawn.

In-form Kaizer Chiefs midfielder George Lebese knows Bafana Bafana will have a tough test on their hands, both in trying to overcome Angola on the field and in bearing the weight of expectation from the nation.

“We are ready, we are focused and we are looking forward to the game. We know what is expected of us and we are also aware that the country is behind us because they know we can do the job. We just have to go out there and put in our best performance,” said Lebese.

“It’s a do or die and we know are carrying hopes of millions of South Africans hence I said we know what is expected from us. The only promise I can make to South Africans is that we will give it a go and the rest will take care of themselves.”